The Theia was a great pirate trireme sailing the Aegean Sea between Messara and Kythera Island during the 5th century BCE.

During the Peloponnesian War, the Adrestia, commanded by the Spartan misthios Kassandra and captained by Barnabas, engaged Theia and her companions in battle, and sank it. Kassandra then claimed the ship's sail and finery for her own.[1]

The name of Eurybia, a ship in Assassin's Creed: Odyssey, references a Titaness in Greek mythology, Theia. She was the sister/consort of Hyperion. In Greek language, the word θείᾱ (theíā) means 'aunt', though as the name of the Titan, it's taken rather as a derivative of θεᾱ́ (theā́), which means 'goddess'. 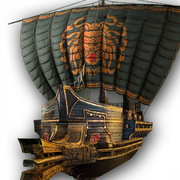 The design of the Theia

Retrieved from "https://assassinscreed.fandom.com/wiki/Theia_(alpha_ship)?oldid=936001"
Community content is available under CC-BY-SA unless otherwise noted.