"There's something I have to show you. We've been lied to this whole time. Everything we know, everything we've been brought up to believe. It's wrong."
―Clay Kaczmarek.[src]-[m]

The Truth referred to a video hidden inside the memory core of the Animus by Clay Kaczmarek with the intent to enlighten and warn Desmond Miles following his capture by Abstergo Industries. It was composed of twenty pieces that could be unlocked by solving Glyph puzzles scattered throughout the Animus' projection of Renaissance Italy.

Similarly, the puzzles also contained the coordinates where Clay had hidden ten Rifts in the virtual machine's programming. Solving the cluster puzzles behind these unlocked another video labelled "the Truth", as well as a hidden executable file referred to as "the Miracle".

In the Truth video, it displayed Adam and Eve, dressed in skin-colored or translucent bodysuits, who were seen running through an open area. The scenery contained a mixture of flora, a reflective blue material that resembled glass, and a white surface that sounded like stone. The garden was decorated in a futuristic style. Moving through a circular automatic door, Adam and Eve freeran to scale a large building.[1]

While they were climbing up the building, they stopped momentarily at a large window, through which a silhouette of a humanoid figure could be seen holding a Piece of Eden, along with several human slaves. These workers appeared to be in a metal refinery, with one slave in the foreground clearly using a hammer to shape a metal object.[1]

Adam and Eve continued climbing until they reached the rooftop, with other futuristic buildings visible on the horizon. Further in the background, a mountain was clearly visible, while there was little other elevation in land elsewhere. The terrain was lush, and a large forest's boundaries were visible.[1]

Eve could then be seen holding a Piece of Eden, before saying "Adam, I have it!" Adam then called out to Eve by name, as both turned to look at what was presumably chasing them. She then shouted to Adam "Look out!", before the video cut to black, and a binary code flashed up.[1]

Along with the video clips hidden behind the Glyphs, small strings of numbers were included at the end of each.[1] Upon Desmond reliving Ezio Auditore's later memories, the Assassin historian Shaun Hastings discovered that the numbers corresponded to further coordinates in Rome where ten Rifts were hidden.[2]

These rifts could only be seen with Eagle Vision, and needed to be climbed into rather than simply being found and scanned. Behind each was one of ten Cluster puzzles that, when completed, unlocked a small video clip displaying a series of seemingly corrupted data with unintelligible words on the top left corner.[2]

Immediately after solving the final cluster, a short video was unlocked that stated "The miracle is in the execution" while the ultrasound of an unborn child was shown. At this point, Rebecca Crane noted that, unlike the Truth video, the Cluster puzzles actually concealed an executable file.[2]

Upon accessing the file, Desmond was then uploaded to an unknown area within the Animus, where he was free to run through a lengthy virtual maze similar to those within the Animus Virtual Training Program. At the end of the maze, Desmond found a broken hologram of Clay made with computing code. Clay told Desmond that all hope was lost and that he must go to Eden to find a woman named Eve, but the effort to maintain a "body" was taxing and he disappeared before he could explain more. The program ended with the ground collapsing from under Desmond's feet, and a loading screen showing Desmond in free fall.[2]

The mountain in the Truth bore a striking resemblance to Mount Kilimanjaro in Tanzania. This would place the scene in Africa, where it coincides with the theories of humanity originating from Africa.

The music played during Adam's and Eve's escape, titled "Wetlands Escape" in the Assassin's Creed II soundtrack, was the same track that played during Desmond and Lucy's escape from Abstergo facility,[1] and Ezio's escape from the Auditore execution.[3]

In the PS3 version, Eve did not say "Look out!". At that point, there was silence, and the binary code for "Eden" appeared.

On a wall in the Miracle's obstacle course, the climbing cubes formed the Assassin insignia.

The figure shown controlling the humans with the Piece of Eden bore a passing resemblance to Minerva.

Eden as seen in the Truth video

Eve holding an Apple of Eden 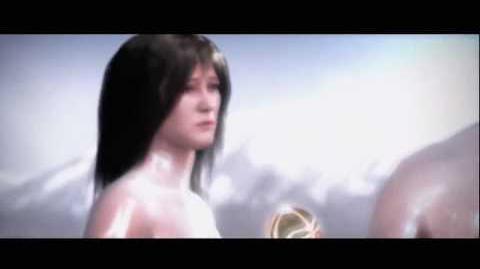 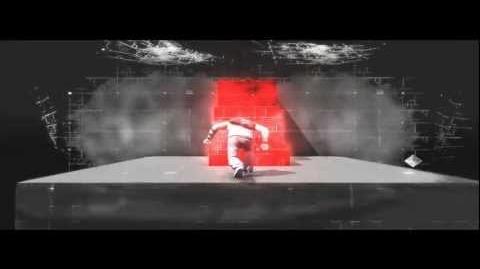