The Poisoner (died 431 BCE), also known as The Poisoner of Athens,[1] was a mercenary and a snake dealer camping outside the city walls of Athens, Greece. 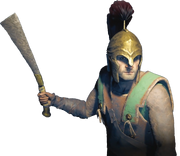 The Poisoner in Aletheia's simulation
Add a photo to this gallery

Retrieved from "https://assassinscreed.fandom.com/wiki/The_Poisoner?oldid=849111"
Community content is available under CC-BY-SA unless otherwise noted.