Assassin's Creed Wiki
Register
Don't have an account?
Sign In
Advertisement
in: Articles that are known by a nickname, Unidentified individuals, Articles revamp,
and 10 more

"Get the fuck off my streets."
―The Monger.[src]

The Monger (died c. 430 BCE), also known as The Monger of Korinthia,[1] was a member of the Peloponnesian League branch of the Cult of Kosmos active in Korinth, Greece during the 5th century BCE.

At some point, the Monger learned of the Cult of Kosmos and joined their ranks, finding their ideas and influence useful and appealing, especially since his taste for sadism was approved of.[2]

During the mid-440s BCE, the Monger had begun to take over Korinth, but he was firmly opposed by a Spartan woman, Myrrine, who had come to the city and befriended the hetaera Anthousa. The Monger confronted Myrrine on the docks and when she swore he'd never rule Korinth, he threatened to kill her and send her head to the Cult as proof.[3]

When Myrrine left Korinth a while later, The Monger's operation went ahead, with his men crushing out all opposition.[3]

By the time of the Peloponnesian War the Monger had almost completely taken over the city of Korinth. The city and the region that was once the richest and most prosperous port in Greece was swallowed by corruption, enough for people to whisper about Korinthia being the "Land of Beautiful Corruption".[4]

In 431 BCE, the Cult of Kosmos met at long last in their shrine beneath the Sanctuary of Delphi in Phokis. The Monger was also there, and drew aside Brison, a member of the Delian League branch of the Cult. The Monger tortured Brison for failing to kill the Athenian sculptor Phidias,[5] and this torture eventually led to Brison's death in the Monger's hands.[6]

Encounter with Kassandra and death

When the Spartan misthios Kassandra came to Korinth, she swiftly learned of the Monger's influence. His men were an army who mugged and shook people down in the streets of Korinth, and he targeted the hetaerae of the city for their access to a wealth of information as well as money. Due to this, the hetaerae fled with their leader Anthousa to the hill of Akrokorinth.[7]

The Stalker, one of the Monger's men, maintained the Abron House north of the Temple of Apollo. It was a house where the Monger would give his victims his 'special treatment', involving chains, oils, and whipping until his victims bled. His latest target was Damalis, one of Anthousa's hetaerae, pressuring one of her clients to lead her to the Abron House. Over the course of her investigation, Kassandra realized she's met the Monger before, in Phokis, as she recognized his handiwork. She ultimately managed to help Damalis avoid the fate the Monger had planned for her with the help of Phoibe.[8]

Around the same time as Kassandra, a letter from the Sage of the Peloponnesian League branch of the Cult reached the Monger, telling him that a Spartan soldier by the name of Brasidas had been sent to Korinth. The Sage considered Brasidas to have been a problem long enough, and tasked the Monger to kill him.[9]

The Monger was also known to smuggle weapons into the port of Korinth and store them in his warehouse in the Port of Lechaion where they would eventually be sold to soldiers participating in the war.[7]

With the help of Brasidas, the Monger's warehouse was later destroyed,[10] with the thug himself killed in it by both Spartans with the aid of Roxana and Erinna. After his death, the Monger's remains were then displayed publicly by Kassandra and Anthousa at the theater against Brasidas' wishes.[11]

In a simulation created by the Isu Aletheia, the Monger's soul was held in the Underworld for the crimes he committed in his past life. After the death of the underworld guardian Cerberos at the hands of Kassandra, the Monger was one of those who escaped his imprisonment through rifts in the underworld. In an attempt to continue the Cult's work, the Monger began recruiting the prisoners, launching numerous attacks onto Hades' properties throughout his realm. He also came into conflict with Elpenor, a former fellow Cultist who was now reformed and worked with Hades to undermine his attacks.[12] Elpenor allied with their former-enemy Kassandra launched an attack on the Lost Temple of Nyx, the Monger's last known location. Finding him there they engaged him in combat and defeated him.[13]

Sometime later during her adventures Kassandra happened to see a notice posted looking for her. When she talked to the hetaera in question, Kassandra learned that the Monger had, according to the hetaera, promised to marry her, but his untimely death had dashed her dreams. Despite Kassandra's disbelief, the hetaera was in mourning for the Monger, and wanted to see the mercenary who had killed him slain. Kassandra lied to her about her involvement in the Monger's death, and the hetaera tasked Kassandra to kill the mercenary at fault.[14]

In 2018 when Layla Hassan relived the memories of Kassandra via a degraded genetic sample found on the Spear of Leonidas using her Animus HR-8.5, it simulated an alternate version of events. The Monger still tortured Brison, but due to being interrupted by Kassandra, Brison survived.[5] His death is also portrayed differently, with Kassandra given the option of killing him in public in the Korinth theater (the heterae can also kill him) as Anthousa wished, or killing him in the Sacred Cave as Brasidas wished.[3]

The Monger was described by Podarkes, a member of the Delian League branch of the Cult of Kosmos as "brutish Redblood" in a letter he sent to Brison, his colleague. The Monger might not have been the brightest, being referred to as a "thug with a small mind", but he had a firm grip and was a tool with its own use in the Cult's designs.[15]

In battle the Monger wielded the Kolossos Mace.[2]

If the Monger, a character in Assassin's Creed: Odyssey, was slain in the Sacred Cave, Lagos provided decisive evidence on the Sage of the Peloponnesian League. However, if the Monger was killed at the theater, Lagos is hostile and suspicious, providing no evidence and dies fighting Kassandra. The alternate clue is a letter the Sage sent to Stentor, Nikolaos' adopted son and the Spartan polemarch in Boeotia.[2]

The Monger beaten at the Sacred Cave 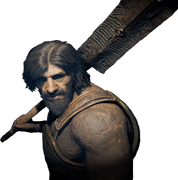 Simulant The Monger of Korinthia