The Meat Cellar
The Slaver's Demise

A War in the Shadows Event

1493
The Hydra's Heads was an altered representation of a fragmented genetic memory.

We found some of the abducted citizens in the old Contarini cellar and freed them. We can only hope the poor souls we could not save in time can one day find their way back to their families.

Our work is not yet done, however.

Bonacolto Contarini, the architect of this Templar slave trade, remains at large. His location is currently unknown, but Corvo Antonelli, a fellow Assassin we found with the captured citizens, pointed us towards his lieutenants. From them, we will discover where Bonacolto has made his lair.

The Spanish Assassins quickly moved through the city and eliminated all of Bonacolto's lieutenants, removing key players in his attempt at maintaining his control over Florence. 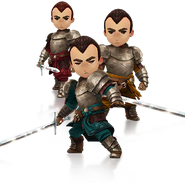