The Hidden Ones (DLC)

http://www.assassinscreed.com
The Hidden Ones is a downloadable content expansion package for Assassin's Creed: Origins, released on 23 January 2018. It is the first out of two expansion packs for the game, alongside The Curse of the Pharaohs.

Set in 38 BCE, after the events of the main game, The Hidden Ones sees Bayek travel to the Sinai Peninsula, where he will become entangled in a conflict between occupying Roman forces and a rebel faction. It also continues the story of the Hidden Ones, exploring the events that came after the formal founding of the Brotherhood.

More than four years after the establishment of the Hidden Ones, Bayek receives a letter from Tahira, who states that the region of Sinai is at war with Rome, and that two members of The Hidden Ones have been killed in a massacre. Traveling to the region, Bayek meets with Tahira, who introduces him to Gamilat, the leader of the rebels. The three plan to draw out General Rufio, the leader of the Romans in the area, by killing his lieutenants; Tacito, Ptahmose, and Ampelius.

While the Hidden Ones are successful in doing so, their hideout is discovered by the Romans. An attack causes Bayek, Tahira, and Kashta to be captured and Bayek is crucified. Before he can be killed, however, Bayek is saved by Amunet and the two rescue Kashta and Tahira, though she later succumbs to her injuries. Amunet tells Bayek that the Sinai branch of The Hidden Ones has been too loud, to the point where she had heard tell of them even in Rome, and that there may be a traitor among them. The two discover Rufio's men burning down a village and stop them before assassinating Rufio.

Amunet then informs Bayek that Gamilat has been provoking Roman soldiers into combat, then hiding his rebels among villages to cause massacres. This creates new rebels, thus bolstering the size of his army. Horrified by this, Bayek confronts Gamilat, who believes he was in the right to do so. Bayek kills Gamilat, who comes to regret his actions while dying. Afterwards, Amunet and Bayek decide to form a creed with the other Hidden Ones, to swear they would not become like Gamilat and exploit innocents for their own cause. Amunet decides to return to Rome, while Bayek remains in Egypt. 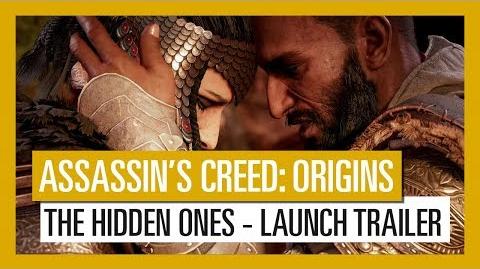 Bayek at the Pyramid of Amenmesse

Amunet and Bayek in Arsinoe

Rufio and his soldiers