The Curse of the Pharaohs

View source
watch 02:07
'Assassin's Creed' Walkthrough: The Curse of the Pharaohs
Do you like this video?
Play Sound

The Curse of the Pharaohs

http://www.assassinscreed.com
The Curse of the Pharaohs is a downloadable content expansion package for Assassin's Creed: Origins, was released on 13 March 2018. It is the second out of two expansion packs for the game, alongside The Hidden Ones.

Set four years after the conclusion of the main game, The Curse of the Pharaohs sees Bayek travel to Thebes and the Valley of the Kings, where he will uncover a mystery that will develop into a "living nightmare" for Bayek. Further exploring Egyptian mythology, the expansion pits Bayek against mythical beasts and dead pharaohs.

Four years after the formation of the Hidden Ones, Bayek receives a letter of Amunet, asking him to investigate rumors about a relic in Thebes. Arriving in the city, he is welcomed by a red-haired Egyptian, Sutekh. Moments later he witnesses an apparition of Nefertiti attacking the people nearby. After engaging and defeating the aparition, Bayek meets Amunet’s contact Merti in Luxor for information. She informs Bayek of rumors of a relic stolen from an unknown Pharaoh’s tomb which some say is the cause of the curse, and to seek counsel of the High Priestess and God's Wife of Amun Isidora at the Temple of Karnak.

After some investigation and even journeys into visions of the pharaohs' afterlives, Bayek defeated Nefertiti in her afterlife of Aaru and Akhenaten in Aten, allowing their souls to return to rest.

At the Necropolis, he encountered Tahemet arguing with Isidora, who left after a warning to her about desecrating the tombs of their mothers. Tahemet instructed Bayek to investigate the tomb for the answers he sought. In the tomb, Bayek investigated the clues and discovered the relic had been passed into the care of the priests of Amun, indicating that Isidora had the relic all along, and therefore was the one who conjured the curse to avenge her mother, who was murdered by tomb robbers when she was trying to stop them. He followed her to the Tutankhamun's tomb, where she was performing a ritual with a number of Ramesses' descendants, including Sutekh, and assassinated her. With the curse ended, Bayek handes over the relic to Sutekh to bury it where no one would ever find it.

Bayek overlooking the Temple of Hatshepsut 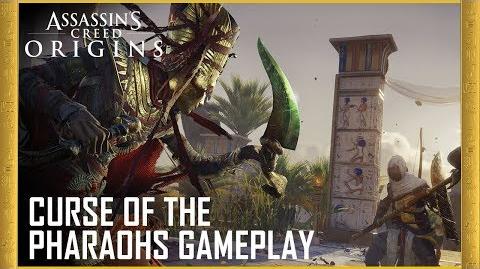 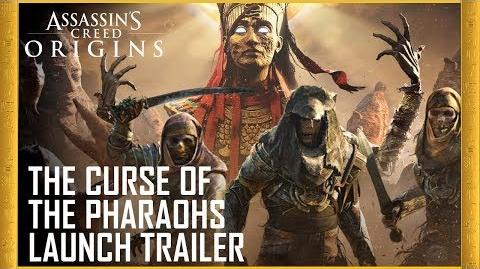