It all started the day three mercenaries disguised as tax-collectors entered the city and began harassing the citizens of Monteriggioni. As the only Assassin currently in the city, it was his duty to save them.

c. 1502
The Corrupted was a virtual representation of one of Lo Sparviero's genetic memories relived by an Abstergo Entertainment research analyst through the Animus Omega.

The only Assassin near Monteriggioni at the time, Lo Sparviero tasked himself with eliminating some mercenaries disguised as tax-collectors that had started harassing the citizens of the city.

After assassinating the mercenaries and escaping the city, Lo Sparviero returned to his hideout and found that while he was chasing the mercenaries, a thief had sneaked in and stolen a chest belonging to the Brotherhood.

A mercenary harassing a civilian 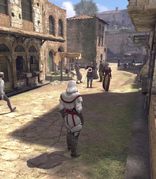 A mercenary and militia member harass a civilian

Lo Sparviero assassinating the mercenary
Add a photo to this gallery

It was circa 1502 that was the date of the memory before is no longer displayed.

Retrieved from "https://assassinscreed.fandom.com/wiki/The_Corrupted?oldid=952563"
Community content is available under CC-BY-SA unless otherwise noted.