The Art of Assassin's Creed: Origins

208
The Art of Assassin's Creed: Origins is an art book for the game of the same name, released by Titan Books on October 31, 2017. It is written by Paul Davies and contains concept art from various artists.

Having taken players all the way to the gateway to the modern world in Syndicate, Assassin’s Creed once again takes fans on an adventure through history.

The Art of Assassin’s Creed: Origins collates hundreds of concept arts, including sketches, final paintings, and 3D Renders, alongside in-depth commentary from the artists and developers, representing the ultimate insight into the design processes behind the game. 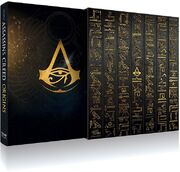 Limited Edition cover
Add a photo to this gallery

Retrieved from "https://assassinscreed.fandom.com/wiki/The_Art_of_Assassin%27s_Creed:_Origins?oldid=906900"
Community content is available under CC-BY-SA unless otherwise noted.