The Art of Assassin's Creed: Odyssey

The Art of Assassin's Creed: Odyssey is an art book. It was released on October 9, 2018.

Featuring one of the largest historical playgrounds for the player to explore, Assassin’s Creed Odyssey is more immersive than ever before.

The newest game in the franchise, Assassin’s Creed Odyssey, takes players on an epic voyage into the Golden Age of Ancient Greece—a dynamic period that will shape the world. The sheer size of the world gives players the chance to discover a variety of vibrant environments: climb an active volcano, explore an underwater shipwreck, and fight a fearsome battle on a beautiful beach.

The Art of Assassin’s Creed Odyssey collates hundreds of concept arts, including sketches, final paintings, and 3D renders, alongside in-depth commentary from the artists and developers, representing the ultimate insight into the design processes behind the game.

Highlights in the book include a close look at the different regions in the game, each with their own identity and secrets to uncover, ancient buildings depicted in all their grandeur and glory, and an amazing range of locations and action. Also showcased is an intimate study of Kassandra and Alexios, their armor, style, and the weapons they use to ply their deadly trade. 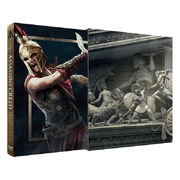 Limited Edition Cover
Add a photo to this gallery

Retrieved from "https://assassinscreed.fandom.com/wiki/The_Art_of_Assassin%27s_Creed:_Odyssey?oldid=855976"
Community content is available under CC-BY-SA unless otherwise noted.