"Amazon fights for the Revolution! Readers recall the astonishing Théroigne de Méricourt, she who leads the crowds at many a revolutionary event! [..] We salute the efforts of this extraordinary woman!"
―The Journal de Paris on Théroigne, 1793.[src]

Anne-Josèphe Théroigne de Méricourt (1762 – 1817), born Anne-Josèphe Terwagne, was a Belgian singer, orator and organizer active in Paris at the time of the French Revolution. During this tumultuous period, she became known as a defender of the poor and a fierce advocate for women's rights.

Born in Marcourt in Luxembourg Province, Théroigne initially pursued an unsuccessful career as an opera singer. Following the storming of the Bastille, she became involved in the revolutionary movement. Théroigne fought to keep Paris' underprivileged fed by intercepting food convoys belonging to wealthy noblemen and also championed women's rights. She had a unique appearance for her time, preferring to wear a riding habit and a man's hat as well as wielding pistols.[1]

When hunger and despair pushed market women to march on Versailles on 5 October 1789, Théroigne and one of her allies joined them in their protest. As Théroigne's reputation preceded her, several men attempted to deter her on her way to the city gates, though the Assassins ensured she and the march could proceed peacefully all the way to Versailles. As a result, king Louis XVI was forced to move to Paris along with his family and the National Assembly. Théroigne herself regularly attended the Assembly and thus moved from Versailles to Paris as well.[1]

However, Théroigne left Paris in 1790 and was arrested by Austrians back home. Following her release, she returned in 1792 and eagerly re-joined the revolutionary cause, with her imprisonment having only added to her notoriety. Consequently, Théroigne was invited to speak at the Jacobin Club.[1]

"People are saying the farmers are hoarding food and fixing prices, but it's not them."
―Théroigne on the disappearing food convoys, 1792.[src]

In the summer of 1792, Théroigne uncovered a conspiracy orchestrated by Templars that intended to sow chaos by starving Paris' citizens, turning them against each other. Tracing the group's activities for over a month, she was led to Flavigny, a woman who had assumed the guise of a couturiere to carry out her operations. Théroigne presented her findings to the National Assembly, but they did not believe her, forcing the revolutionary to take action herself.[2]

Set on eliminating Flavigny's agents, Théroigne traveled to an address in the Hôtel-de-ville district that she had determined, but not before leaving a message for the Assassins, of whose presence she was also aware. Entering the building, she ended up being outnumbered, but was saved by the timely appearance of the Assassins. Together, they eliminated Flavigny's men and secured the stolen food, following which Théroigne told the Assassins of Flavigny's location, trusting them to take the Templar out.[2]

Later, Théroigne found out about a gunsmith designing weapons for the Templars. In response, she asked the Assassin Arno Dorian, who had previously aided her, to kill the gunsmith and retrieve the blueprints. In this way, her own Parisian militia would be able to manufacture more advanced weaponry for themselves. Desiring to establish an army of women, Théroigne would call on Arno once more in 1793, asking him to distribute recruitment handbills at various brothels.[2]

"Jacobins! It is your turn to bleed! The Terror ends tonight!"
―Théroigne prior to her attack on the Jacobins' hideout, 1794.[src]

Politically, Théroigne had begun to shift towards the more moderate Girondists, of whom she became a fervent supporter. Consequently, she was named an enemy of the French Republic by Maximilien de Robespierre, causing a group of Jacobin supporters to attack her in 1793 and whip her within an inch of her life.[2]

On 29 July 1794, the day after the death of Robespierre in the Thermidorian Reaction, Théroigne led a rally outside of the Jacobin hideout against the last of the Jacobins, intent on taking revenge. Assisted by the Assassins, she took out many of the remaining Jacobins; the Jacobin leaders, who had been attempting to escape through the catacombs, were eliminated by Théroigne's Assassin allies.[2] 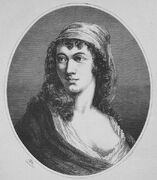 Théroigne rallying the citizens during the Women's March on Versailles