Testiklos the Nut was a mercenary who operated in Greece during the Peloponnesian War. He was also the half-brother of the pankratiast Olympic champion Testikles.

Testiklos' mood had been unstable ever since he and his half-brother Testikles were separated early in life.  He never felt as secure as he was with his own kin, and he dealt with the separation by violently attacking objects. He even broke bones of people who displeased him.

During the war, Testiklos crossed paths with the Spartan misthios Kassandra, a friend of his brother.[1]

Testiklos and his pet boar 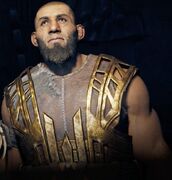 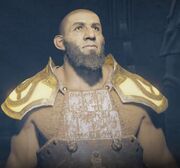