Terence is a professor specialized in 'high optical technology'. In 2012, he performed an eye-transplantation on the Assassin Jonathan Hawk.

In 2012, Terence treated Jonathan after he had lost the use of his right eye due to an "incident in the field". After doing research, the professor concluded that replacing the damaged eye was not possible, so he proposed to execute a revolutionary transplantation: a miniature camera was to be implanted in Jonathan's eye socket.[1]

Terence then told Jonathan that his artificial eyeball had been stolen two days earlier. How the thieves had proceeded and what they attempted to achieve was unclear; the eyeball, after all, was unable to function on its own. The operation, however, did not have to be postponed.[1]

Later that year, Terence performed the transplantation and it proved successful. The professor informed Jonathan that although he could not use his left eye anymore, his new camera-eye improved his eyesight and field of view significantly.[2]

Terence discussing the transplantation with Jonathan 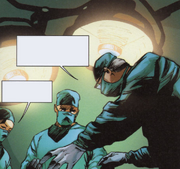 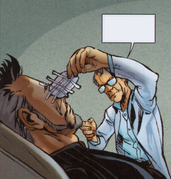