The Temple Mount is a hill located in the rich district of Jerusalem. On its top is an artificial plateau which houses two of the most important religious buildings in the city, the Dome of the Rock and the al-Aqsa Mosque. Beneath the Temple Mount was the ancient Solomon's Temple, which was constructed from 957 BCE to 951 BCE. The hill could only be entered through two separate entrances, both of which were heavily guarded, as it was surrounded by a massive wall.

In 1191, the Templar Majd Addin performed a public execution at the foot of the Temple Mount, which was infiltrated by the Assassin Altaïr Ibn-La'Ahad, who then assassinated him.[1] 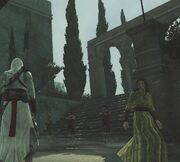 One of the two entrances to the Temple Mount

The Temple Mount seen from above

Retrieved from "https://assassinscreed.fandom.com/wiki/Temple_Mount?oldid=793405"
Community content is available under CC-BY-SA unless otherwise noted.