"We built vaults within which to work, each dedicated to a different method of salvation. They were placed underground to avoid the war which raged above, and also as a precaution, should we fail in our efforts."
―Jupiter to Desmond Miles, 2012.[src]-[m]

Temples, also referred to as Vaults, are underground locations constructed by the Isu. A number of these were built in an attempt to discover a way to protect the Earth from the First Disaster, as well as any recurrence. Though Temples are located across the globe, there is a disproportionately high number of them in and around Europe than elsewhere in the world.

"Built by those who knew to turn away from war. They worked to protect us – to save us from the fire. If you can find them... If their work can be saved... so too might this world."
―Minerva to Ezio Auditore, 1499.[src]-[m]

The Temples were built by members of the First Civilization who avoided the war raging between humans and their own kind. They functioned as a way to preserve the world and its people and as such were often highly decorated with the Isu script.[1] The Temples were established underground, as a way both to protect them from the battle present on the surface, and as a precaution should they fail to avert the coming catastrophe.[2]

"Six we tried in succession, each more encouraging than the last. But none worked. And then the world ended..."
―Jupiter to Desmond Miles, 2012.[src]-[m]

Each Temple researched a different way to prevent the disaster, and the findings were transmitted to the Grand Temple, located underneath a First Civilization municipality in modern New York. From there, three members of the First Civilization—Jupiter, Juno, and Minerva—sorted the solutions most likely to succeed. They tested six possible solutions in succession,[2][3][4] with each being more promising than the last. However, all six solutions ultimately failed, and before any further solutions could be tested, a catastrophe decimated the planet, nearly wiping out the entire First Civilization.[2]

"You must go there. To the place where we labored... labored and lost. Take my words. Pass them from your head into your hands. That is how you will open the way."
―Jupiter to Desmond Miles, 2012.[src]-[m]

In 2012, Minerva spoke to Desmond Miles, who relived the genetic memories of his ancestor Ezio Auditore through a machine known as the Animus. When Ezio accessed a vault under the Sistine Chapel in 1499, Minerva told Desmond about the war that had wiped out all of her kind, and its impending repeat. She also briefly told Desmond about the history of the Temples, before telling him to guard against "the cross."[5]

Several weeks later, on 10 October 2012, Desmond and his team of fellow modern-day Assassins drove to another vault beneath the Colosseum in Rome. There, Juno spoke to Desmond as he free-ran around the Vault attempting to access the pedestal at its center. Juno informed Desmond about the history behind confrontations between humans and the First Civilization. Once Desmond had activated the Apple of Eden on the pedestal, Juno's presence took command of Desmond through the Apple and made him stab his fellow Assassin Lucy Stillman in the abdomen with his Hidden Blade,[6] before he fell unconscious as his subconscious splintered.[2]

After Desmond accessed a synch nexus and separated the lives of his ancestors from his own memories, an apparition of Jupiter spoke to Desmond, telling him about the catastrophe that had previously occurred and also explaining the Temples' purposes in further detail. Lastly, Jupiter told Desmond that he needed to go to the Grand Temple in order to stop the impending cataclysm, though he also admitted that he was unsure as to whether the Temples could successfully prevent the disaster.[2]

Unless otherwise noted, current status of the Temple is unknown.

Cave of the Forgotten Isle
Phokis[16]

Lair of the Sphinx
Boeotia[19] 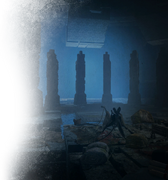