"The long, silver needle was crafted to look like a sword, while a squat cross with a ruby in its center was affixed atop the sword's hilt. More than an ornament, the pin's sharp tip was coated in a toxin. It was to be used against an enemy if attacked... and use against oneself, if need be."
―Simon Hathaway's description of the Templar Pin.[src]

The Templar pin was a bladed adornment worn by some French members of the Templar Order around the time of the French Revolution, that could be used as a weapon and replaced the function of Templar rings, signifying the membership in the Order. Typically, the pins featured the Cross of the Templars in its center with intricate designs surrounding the symbol, varying according to the blacksmith or the Templar owner.

Arno: "It's... the weapon that killed your father"
Élise: "That's a Templar badge of office."
—Arno Dorian and Élise de la Serre.[src]

During the French Revolution, these bladed pins were made by the silversmith and Templar François-Thomas Germain for his fellow French Templar; after he was excommunicated, they were only made for the members of his extremist faction. When his follower, Charles Gabriel Sivert, recruited the Roi des Thunes into this faction, Charles gave him a pin and addressed him as "brother". Later, the Roi used his pin's blade to kill the Grand Master François de la Serre, piercing the bladed side into the man's neck and leaving him to bleed to death.[1]

By 1927, Albert Bolden, who acted as the Black Cross at the time, used a Templar pin as his weapon of choice. His pin could be filled with various poison in the head. He was known to use at least two types: one that killed instantly and another that killed after one hour. Both of these poisons appear to have been stored within the same pin, to choose between them at will. He had used the pin as an offensive weapon while on various missions to kill off Templars who have abused the Templar Order's doctrine.[2]

By 2016, the pin was worn by Templars who worked at Abstergo Industries, specifically the Templars who were remembers of the Inner Sanctum of the Templar Order, as Simon Hathaway received the pin when he was welcomed into the Inner Sanctum as a member. The Black Cross' Templar pin would end up in the hands of Juhani Otso Berg, who asked Violet da Costa to pass the pin to one of the Albert Bolden's descendants, André Bolden. André would later give the pin back to Berg, convincing him to take up the Black Cross mantle.[2]

The Templar pin is primarily used as a Templar badge of office and are primarily worn by Templars who were members of the Inner Sanctum. However, the sharp tip of the Templar pin was also laced with a toxin, allowing the Templar pin to be used as a secretive weapon in cases of self-defense, similarly to how the Assassins have their Hidden Blades.

The Templar Pin's sharp tip can also be used as a tool for assassinations, similarly to the Hidden Blades. This was seen when the Roi des Thunes used his pin to kill Grand Master François de la Serre, plunging the bladed side of the pin into the unsuspecting man's neck and leaving him to bleed to death in Arno Dorian's hands.[1] 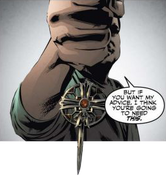