Tattoo is a mark on a body made by inserting ink and/or pigments into the skin which can either be temporary or permanent. Sometimes the term tattoo is also used to refer to face paint, scars, or other means of adorning the skin with color.

Many bandits in Greece at the time of the Peloponnesian War adorned their faces and arms, as well as backs and chests, with tattoos. For groups which lived in the wilderness like the Followers of Ares and the Daughters of Artemis, these markings signified their allegiance.[1] Other types of people like the sailor Barnabas also wore them for their own personal reasons.[2].

After his son was murdered by the Order of the Ancients in 49 BCE,[3] the Medjay Bayek of Siwa had the cryptonyms of each of their members tattooed on his right arm. Each time he assassinated one of these members in his quest for vengeance, he crossed the name out.[4] Others as well took tattoos, sometimes to remember Egypt like Hapti.[5]

Vikings tattooed their skin, believing the artwork to enhance their own innate abilities. These designs could be applied at places like Svend and Tove's Tattoo Shop in Ravensthorpe, and included such patterns as a "Hel Sign", Jörmungandr, and an "Auki Sign".[6]

The Moors of Spain were in habit of tattooing their faces, and this was also practiced by the Spanish Assassins María and Aguilar de Nerha.[7][8]

During the Golden Age of Piracy, tattoos were especially favored by pirates themselves, with the Welsh pirate Edward Kenway sporting numerous tattoos all over his body.[9]

Among the Kanien'kehá:ka, decorations like tattoos were common. Teiowí:sonte's markings were specifically referred to as tattoos.[10]

In the 19th century, tattoos were born by various people of London, England. Of special note was the British Assassin Jacob Frye, who had a tattoo of a peregrine falcon on his left pectoral and a cross surrounded by diamonds on his left upper arm.[11]

In Assassin's Creed: Odyssey, various Animus modifications allowed either the Eagle Bearer themselves, or the crew upon their ship, the Adrestia, to display tattoos. For the Eagle Bearer, these included the Mighty Harness, and for the crew, this was clear including in the skin Water Born. 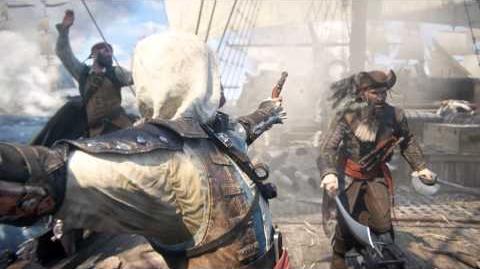 A member of the Blighters of Victorian London 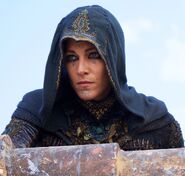 A Huntress of Artemis

A bandit with simple facial tattoos

A bandit with large facial tattoo extending to neck

A bandit archer with feathers on his arm, and a griffin on his chest