Tampa Bay is a large, natural harbor and estuary along the Gulf of Mexico on the west central coast of Florida.

In the area a Jesuit missionary settlement was located, known for its gardens of serenity and impressive wine. The settlement was build in the hope to convert the local natives and is made mostly out of sandstone. During the day, the massive stone wall kept the place cool in the sweltering heat and warm during the night. Underneath the camp tunnels were build, in case of a dust storm or an attack.[1]

In 2013, Tampa Bay was used as a simulated location created by Abstergo Industries' entertainment branch, for the console stage of their Animus technology.[1]

The simulation depicted Tampa Bay as a small, sandstone settlement located in an arid environment. The settlement included an open courtyard, a church and a bell tower. Adjacent to the bell tower was a square, which led to a busy marketplace. Surrounding the main settlement were arching walls and aqueducts. Further away, huge wine barrels and storage houses had also been set up.[1]

With the implementation of new technology, simulated locations in the console stage were upgraded to have multiple aesthetic variations, as well as dynamic weather. Because of this, Tampa Bay could be utilized during the day, the night, or amidst rain.[1] 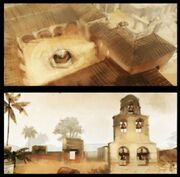 Tampa Bay during the day 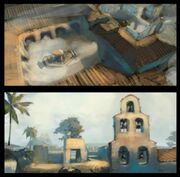 Tampa Bay during the evening

The settlement
Add a photo to this gallery

The Wayfarer being stalked by the Shaman

The Firebrand being pounced upon by the Night Stalker 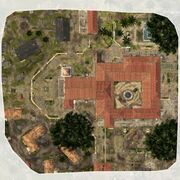 Retrieved from "https://assassinscreed.fandom.com/wiki/Tampa_Bay?oldid=793362"
Community content is available under CC-BY-SA unless otherwise noted.