Assassin's Creed Wiki
Register
Don't have an account?
Sign In
Advertisement
in: Good articles, Articles in need of sources, 1157 births,
and 7 more

"Beggars, whores, addicts, lepers. Do they strike you as proper slaves? Unfit for even the most menial tasks? No. I took them not to sell, but to save! And yet you'd kill us all, for no other reason than it was asked of you."
―Talal's final words to Altaïr, 1191.[src]

Talal (c. 1157 – 1191) was a slaver and a member of the Levantine Templars. He was one of nine men killed by the Assassin Altaïr Ibn-La'Ahad on his quest for redemption, upon the order of Al Mualim, the Mentor of the Levantine Assassins during the Third Crusade. He was located in the rich district of Jerusalem where he had based his slave trading business.

The slaver of Jerusalem

"He traffics human lives, kidnapping Jerusalem citizens and selling them to slavery."
―Altaïr about Talal.[src]

A former member of the Saracen army, [citation needed] Talal returned to the holy city of Jerusalem, where he established a bandit gang made up of men whose loyalty to him was unquestioned. Operating out of an old warehouse, they soon became known for kidnapping men, women and children of all social stations and shipping them off to distant lands to be sold as slaves, many of them sent to Garnier de Naplouse in Acre for his experiments. Although the city guard was well aware of Talal's actions, they turned a blind eye in return for regular bribes from the bandits.[1]

A master athlete, Talal's skill with the bow and the sword were legendary. He had no problem fighting his enemies personally and took every opportunity to boast of his talents to anyone who would listen. Furthermore, he justified his involvement with the slave trade by noting that many of his captives were poor beggars, prostitutes and criminals, who he claimed would lead much better lives if they were given work and discipline.[1]

"It seems I cannot help you, for you do not wish to help yourself. And I cannot allow my work to be threatened. You leave me no choice. You must die."
―Talal speaking to Altaïr, 1191.[src]

Altaïr investigated Talal's movements within the rich district and discovered him to be within his slave warehouse. As soon as the Assassin entered the warehouse, Talal began taunting him.[1]

He then situated his men to surround Altaïr, boasting that he had led the Assassin there. The Templar then ordered his men to kill the distressed man, and his orders were followed without question. Talal watched the fight, looking on in anticipation for the guards to defeat Altaïr. However, the Assassin overpowered the guards and defeated them.[1]

Recognizing the danger he was in, Talal fled from his slave complex through a trapdoor in the ceiling. Altaïr immediately gave chase to his fleeing target, and pursued him in a long, agile chase across the rooftops and through the streets of Jerusalem.[1]

Talal often looked over his shoulder during the chase and tried to convince his pursuer into sparing him. As Talal was occupied with this, he failed to notice a civilian woman carrying a number of clay jugs and collided with her, sending both tumbling to the ground. Before Talal could resume fleeing, Altaïr quickly closed the gap between them, and stabbed him with his Hidden Blade.[2]

With his dying words, Talal remarked that the people he had been selling were the most unfortunate people in Jerusalem, not good as slaves, and that rather than profiting from them, he had been trying to help them. He also remarked that he no longer believed in anything after death and that the people he had "rescued" had abandoned their beliefs as long as he had. Unable to speak anymore, Talal died in Altaïr's arms.[1]

Talal was not a man of high morals, locking up men and women against their will. He claimed and thought he did the right thing, stating the people he imprisoned to be mere beggars, whores, addicts and lepers who he was trying to save. He knew that his death would not get in the way of his Templar brothers' goals.[1]

Like his fellow Templars, he had lost faith in God, claiming that not only he had been abandoned, but the people he took into his care as well, and he believed to be saving them. He was somewhat arrogant as well, believing that Altaïr would fail to defeat his men and even taunting Altaïr beforehand.[1]

Talal usually carried a bow on his back, along with a quiver full of arrows. He also wore a sword sheathed in its scabbard, though he was more experienced with a bow and arrow. He wore a dark gray tunic with yellow stripes and plain white leggings. Talal also wore two vambraces on each wrist and had a large belt around him. He also had a goatee and had his hair braided flat against the back of his head. He was of average height and stature.[1] 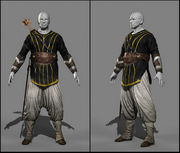 Talal in his warehouse