Assassin's Creed Wiki
Register
Don't have an account?
Sign In
Advertisement
in: Articles in need of sources, 82 BCE births, 48 BCE deaths,
and 6 more

"There are things I regret! We all labor for higher powers. We are all in thrall to greater forces. There is no escape."
―Taharqa to Bayek, 48 BCE[src]-[m]

Taharqa (c. 82 BCE – 48 BCE), also known as The Scarab, was the grand planner of Sais the steward of Letopolis within the Ptolemaic Kingdom during the 1st century BCE.

While publicly dedicating himself to rebuilding the ancient city of Letopolis, Taharqa was secretly a member of the Order of the Ancients and sought to claim the city in the name of the Order and build power from within. His family knew nothing of his clandestine activities; in fact, his father-in-law, Ghupa, unknowingly agreed to spy against him for Harkhuf, an informant of Apollodorus.

"There are many terrible stories about the Scarab, I am sure Apollodorus told you. Tales of mutilations, disappearances, and folk buried in the desert and left to die. A horrendous fate. Trapped in the shimmering sand. Your mind and body pounded by the relentless sun. Waiting for the final release into the Duat."
―Harkhuf describing the Scarab to Bayek, 48 BCE.[src]-[m]

As a member of the Order with Nubian ethnicity,[1] Taharqa served as the driving force behind the Order's power in the Nile Delta. Anyone who opposed his rule were subjected a myriad of torture, either being mutilated or buried in the desert up to their neck and left to die.[2] To further enforce his rule, Taharqa with took up the role of the grand planner of Sais and worked with the governor Sefetu.[3]

Taharqa later married a woman named Maharet, with whom they had a son named Kawab. As they were unaware of his identity as a member of the Order, Taharqa maintained his façade and undertook a project to reclaim the city of Letopolis from the desert. Appointed as the city's steward, Taharqa attempted to garner further strength from there.[3] After discovering a number of silica beneath Letopolis, Taharqa sent them to fellow Ancients member Khaliset, who became distant from the Order in recent years. He also informed her of the men he had sent to Giza, Memphis and Yamu to buildup their influence.[2]

Taharqa also travelled to the Sinai in pursuit of the Shards from a Star legend, in which a sacred rock was said to have fallen from the sky into Egypt. Taharqa hoped to recover the shards from the rock, intending to honor Amenmesse, a pharaoh of the Nineteenth Dynasty of Egypt, but he ultimately abandoned the search.[4]

Bayek: "Master Taharqa? My name is Bayek, from Siwa."
Taharqa: "I am indeed Taharqa, grand planner of Sais and steward of Letopolis."
Bayek: "I met your family. Your wife sent me here. She said you might know about the one called the Scarab."
Taharqa: "This is not the place to speak, for who knows who may overhear our words? Come inside, and I will answer you."
—Taharqa meeting Bayek, 48 BCE.[src]-[m]

Around 48 BCE, shortly before the Medjay Bayek of Siwa came to Sais, Taharqa had Ghupa beaten and tortured, including having his tongue cut out after Ghupa discovered a handsome payment Taharqa had made to a local captain in exchange for his loyalty. A cunning deceiver, Taharqa was able to divert suspicion from himself by finding Ghupa and bringing him home after the soldiers who caught him left him for dead.[2]

In his quest for vengeance against the Order of the Ancients, Bayek was directed to Taharqa in Letopolis by Maharet and Kawab in Sais. Unaware of Taharqa's true nature, Bayek visited him and asked for his aid in finding the Scarab. Before he could answer, Taharqa was alerted to a raid by local group of bandits known as the Disciples of the Lioness, who often used the sandstorms that ravaged Letopolis as a cover to plunder the city. In return for his aid, Taharqa promised Bayek answers.[5]

Taharqa: "I am but one in the Order of Ancients. This victory will bring you no peace!"
Bayek: "It is not peace that I seek. It is not for my soul that I walk this path"
Taharqa: "The Order of Ancients will remember me as the bringer of waters and a builder of cities!"
Bayek: "Or the desert will blow in and scatter the dream of Letopolis like dust."
—Taharqa and Bayek's final exchange, 48 BCE.[src]-[m]

After managing to defend the city and slaying the bandits at their hideout, Taharqa invited Bayek to join him and his family for a meal, where Taharqa had promised to discuss The Scarab. However, Taharqa drugged Bayek's drink, and he only realised Taharqa's true identity after noticing his smile and snake-shaped ring just before passing out. Taharqa had Bayek buried in the nearby desert up to his neck, leaving him for dead and telling the soldiers doing the dirty work to strip him of his gear and have it shipped to Sefetu, Taharqa's ally at Fort Nikiou.[5]

After escaping with the help of his horse and Senu and recovering his possessions from a military camp nearby, Bayek returned to Letopolis to exact vengeance, assassinating Taharqa from above as he prayed to the goddess Nut in the Temple of Horus. As he laid dying, Taharqa was convinced his achievements for the Order and for himself would cement his name through history, and that his name would never be forgotten. Bayek, holding a miniature scarab in his hand that he tossed to the ground, told Taharqa that his creations and achivements would only turn to dust, and his name would truly be forgotten.[5]

After his death, Tarhaqa's son Kawab would attempt to seek vengeance against Bayek, tracking him throughout Egypt and eventually to the Sinai in 38 BCE. Kawab hired two mercenaries to patrol the peninsula to eliminate Bayek, though they were later hunted down themselves. Bayek eventually discovered Kawab's location and defeated him in unarmed combat. Bayek convinced Kawab to give up following Taharqa's footsteps and join Bayek's order, the Hidden Ones, a precursor to the Assassin Brotherhood.[6].

At first glance, Tarhaqa cared much for his family as he wished to leave behind a legacy for the greater good and for the lives of his son and wife. He also cared for the people living in Letopolis and even gave them homes to live in, provided they first help him dig them out. However, underneath his kind outward appearance, he was a ruthless man who killed, tortured and mutilated anyone who opposed him, like his father-in-law whom he had his tongue cut out. One of his favorite methods of execution was to have people buried up to their necks in sand and leaving them to die from starvation and dehydration and he even mocked them by filling a cup with water right in front of them and then spilling it. However, he considered his actions a necessary evil as he did regret some of them and he believed that everyone wanted to reach for higher powers and that there's no escape from it. [citation needed] 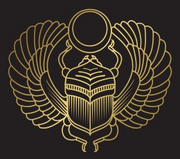