Assassin's Creed Wiki
Register
Don't have an account?
Sign In
Advertisement
in: Articles that are known by a nickname, Unidentified individuals, 422 BCE deaths,
and 9 more

"You can find drachmae anywhere if you look hard enough. All it takes is a little persuasion."
―Swordfish[src]

Swordfish (died c. 422 BCE), also known as the Swordfish of Octopus Bay,[1] was a member of the Heroes of the Cult branch of the Cult of Kosmos. He had a hideout in Hermit's Dive below the Fisherman's Beacon in the Octopus Bay of Messara, Greece.

When Swordfish joined the Cult of Kosmos, or why, was never discovered. A rumour said that his first sacrifice to Kosmos was none other but his own father, whose hollowed out skull he fashioned into a wine cup.[2] He also believed himself to be one of the Cult's "greatest heroes".[3]

Swordfish was a known treasure hunter, who used to dive around in the Octopus Bay, looking for valuables.[4] This habit led to him joining with other men to enter the Minotaur's labyrinth seeking riches and glory. One of the men, Nikios, was killed by the Minotaur and the others barely managed to escape alive, sealing the labyrinth behind them.[5]

Afterwards, Swordfish' hold on the city of Heraklion, especially its fish market in the Fisherman's Beachhead, remained strong, even though the man himself went largely into hiding. The fishermen paid him tithes, and if anyone dared to say a word against him, they were swiftly disciplined, usually by being fed to the sharks outside his hideout.[6][7]

Ardos, the orphaned son of Nikios, knew about Swordfish as well, calling him "the boss of Octopus Bay."[5]

In 431 BCE, when the Cult gathered together for the first time in an apparently long while at the Sanctuary of Kosmos beneath the Sanctuary of Delphi in Phokis, Swordfish didn't participate.[2] Instead, he'd sent a letter beforehand renouncing the Cult,[8] challenging them to send "this new mystery "Deimos" to Messara", firmly believing that Kosmos would protect him.[9]

Due to this desertion, the Cult set out to hunt Swordfish. He sailed to Melos, where someone he believed to have been allied with the Cult tried to take his head, but failed.[9] From Melos, Swordfish continued south.[10]

The Sage of the Gods of the Aegean Sea, The Hydra, ordered a manhunt for Swordfish, and his underling The Octopus took up the challenge,[10] following Swordfish to the waters around the island of Anaphi in her ship Theia.[11]

Swordfish evaded his hunters and withdrew to Hermit's Dive. There he controlled his bandits who were spread all over Messara, and planned building a "new", "pure temple" to Kosmos, bringing glory to both of them.[3]

In 422 BCE, he was found by the Spartan misthios Kassandra while she was seeking information on Nikios at the request of his orphaned son Ardos. Swordfish didn't offer any help, instead attacking Kassandra, who killed him in self-defence. Kassandra then claimed Swordfish's piece of legendary armor from his body.[6]

After his traumatic experience in the Minotaur's labyrinth, Swordfish's psychological state started to deteriorate. He developed post-traumatic stress disorder which was visible by his hyper-alertness, agitated state as well as his habit of talking to himself. He had seemingly grown disillusioned with the Cult and deserted it, refusing to acknowledge the authority of Deimos and believing even the Sage of his own branch had forgotten him.[2][3] The Swordfish attacked Kassandra on the mistaken assumption that she was the Cult's enforcer Deimos and was there to either kill him or take him to the Cult.[6]

Swordfish by the altar

The Swordfish in Aletheia's simulation 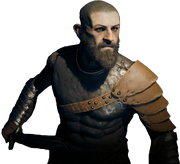