Assassin's Creed Wiki
Register
Don't have an account?
Sign In
Advertisement
in: Articles with conjectural titles, Swords of Eden

Sword of Eden #2 was one of the Swords of Eden, bladed artifacts created by the First Civilization scientist, Hephaestus, to use in the fight during the War of Unification. These Pieces of Eden seemed to grant their bearers great power and leadership, and were later used by influential humans in war and conquest. This particular sword, designed like a saber, was notably wielded by two leaders of the Mongol Empire.

The Sword of Eden was created by Hephaestus, "the maker", during the Isu Era to bring about the end of the War of Unification.[1]

By the early 13th century, the Sword was in possession of Genghis Khan, a Mongol warlord, who led his Empire through mass expansions into the West. By 1217, the Mentor of the Levantine Assassins, Altaïr Ibn-La'Ahad, correctly suspected Genghis Khan of wielding the Sword.[3] Thus, Altaïr, his wife Maria and their son Darim traveled to Mongolia intending to assassinate Khan and retrieve the Piece of Eden. In 1227, Darim and the Mongolian Assassin Qulan Gal killed Genghis Khan.[4][5]

However, the artifact remained in Mongol hands, and Genghis Khan's grandson Hülegü Khan used it in his conquests of the Levant during the 1250s, notably during his attacks on the Assassin strongholds in Alamut and Masyaf.[2] 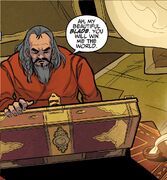 Genghis Khan admiring his Sword in its box