The Sword of Damokles was one of the Swords of Eden.

Created by the Isu scientist Hephaistos during the War of Unification, the Sword of Damokles and other Pieces of Eden like it seemed to grant their bearers great power and leadership, and were later used by influential humans in battle.[1]

By the late 5th century BCE, the artifact had come into the possession of the Cult of Kosmos, an offshoot of the Hermeticists. The Cult granted the weapon to their champion Deimos, the grandson of King Leonidas of Sparta, as his direct descent from the Isu allowed him to utilize more of the artifact's potential. After Deimos' defeat at the hands of his sister Kassandra,[2] the sword fell from the height of Mount Taygetos.[3] She later claimed the artifact, but was unable to use its enhanced abilities.[2]

The Sword of Damokles is the weapon wielded in Assassin's Creed: Odyssey by Deimos, one of the game's main antagonists. After defeating Deimos, the player is rewarded with the legendary sword. If Deimos is successfully recruited as a lieutenant aboard the player's ship Adrestia, however, they continue to wield the blade as though the player does not have it. This effectively means that the legendary sword received by the player is a new copy rather than it being transferred from Deimos' possession to the player. Canonically there would only be one Sword of Damokles. This anomaly is also seen in the cases of Darius with the Pride of the Lion and Leda with the Hero's Sword.

As the Peloponnesian War predates the eponymous Damokles by almost a century, the sword's name is anachronistic unless it refers to a different Damokles. However, given its descriptions it is unlikely that that is the case. Nonetheless, its history is suggested by a mold within the Ancient Forge on the Greek island of Andros. Upon seeing the mold, Kassandra comments about its similarity to the blade wielded by Deimos. 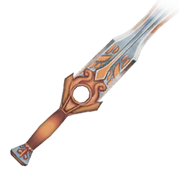 The Sword as it appears in Rebellion

Kassandra wielding the Sword of Damokles