The Sword of Altaïr was the personal sword of significant power wielded by Altaïr Ibn-La'Ahad through much of his life as an Assassin.

During the Renaissance in Italy and Constantinople, the Assassin Ezio Auditore da Firenze, also made use of the weapon.

The sword was forged from a smooth, silver metal, with its cross guard shaped like an eagle's wings, and the pommel in the motif of an eagle's head. Along with this, the sword's hilt was wrapped in strong, dark brown leather for gripping, and it was also stored in a leather scabbard, although this was only used by Masyaf guards and Altaïr himself.

Altaïr made good use of his sword throughout most of his early life as an Assassin. He wielded it with great skill and ease during missions such as the quest for the Chalice.[1]

By 1191, Altaïr had reached the rank of Master Assassin and he instead made use of a Syrian sword with a curved blade and a golden hilt. However, this sword was taken from him, along with his armor, other weapons and status after Al Mualim demoted him to the rank of novice for breaking all three tenets of the Creed.[2]

During his progression back into the higher ranks, Altaïr started with a basic sword similar to his personal one, though it lacked a cross guard. After he assassinated the first four of his nine assigned targets, another sword, this time with the cross guard shaped like an eagle's wings, was granted to him until finally, upon the seventh target, his personal sword was returned to him. The leather grip instead was replaced by a silver and light grey color with a tribal design. Altaïr used his sword once more in his battles until he finally rose again to the rank of Master Assassin, and the Syrian sword was awarded to him again.[2]

During the Renaissance, Ezio Auditore was able to purchase Altaïr's sword from the blacksmith in Monteriggioni for 45,000 florins. He made good use of the weapon in his battles, especially during his fight with Rodrigo Borgia in the Sistine Chapel in Rome.[3]

Ezio kept the sword with him and used it to fight off Borgia guards as he escaped the Vatican with his uncle Mario Auditore. After they returned to Monteriggioni, the Borgia attacked the town, and the sword was lost in the resulting turmoil, along with Altaïr's armor and Ezio's weapons that were fashioned from the Codex designs by Leonardo da Vinci.[4]

Some time after establishing the Assassins Guild in Rome, Ezio was able to recover the sword once again after completing all five Guild challenges, although it is possible his recruits retrieved it for him. Equipped with the sword, Ezio wielded it against Cesare Borgia and his forces during the siege of Viana.[4]

Although he did not bring it with him on his expedition to Masyaf, Ezio eventually acquired the weapon yet again some time after he had allied himself with the Ottoman Assassins in Constantinople. The sword became available once he had completed the third series of the Guild challenges, again, possibly due to him having his recruits retrieve it.[5]

In the early 18th century, Edward Kenway found a pair of identical swords at some point during his time sailing in the Caribbean.[6] One sword and a similarly styled dagger ended up in the hands of Templar Shay Cormac in mid 18th century. He recovered it from a chest in the North Atlantic after his fleet had successfully carried out all missions set by him.[7]

The sword as it appears in Identity

The sword in the early 18th century

The sword in mid 18th century 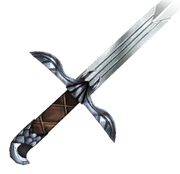 The sword as it appears in Rebellion