The Sun is a star at the center of Earth's solar system.

In 75,000 BCE, a coronal mass ejection erupted from the Sun and struck the Earth, decimating a large portion of the human and Isu populations on the planet and scorching the surface of the Earth.[1]

In 2012, a second, equally powerful coronal mass ejection erupted from the Sun, once again hitting the Earth. Fortunately for the planet's inhabitants, measures taken by the previous eruption's survivors—namely Minerva, Juno, and Jupiter—to defend against such a re-occurrence, meant that the planet survived largely unscathed.[2]

The Sun features prominently in multiple religions and myths. In Greek mythology, the god Apollo drove the sun across the sky, a role earlier associated with the god Helios.[3] In ancient Egyptian mythology, the Sun was personified in the god Ra[4], with the syncretized Greco-Egyptian god Serapis regarded as the "lord of the sun".[5] The Sun was also said to have been the right eye of the god Horus.[6] Other Egyptian deities were often depicted adorned with the sun disc. Aten in turn was the sun disc itself, personified, and made prominent by the pharaoh Akhenaten.[7]

Among the native Iroquois, the Sun was said to be the eye of the mythical Sky Woman, with her other eye becoming the Moon.[8]

The Ottoman Assassin Piri Reis once mentioned to the Assassin Mentor Ezio Auditore that the early Christians used to place the east at the top of their maps due to a belief that their heaven was located there, beyond Cathay.[9]

The Place Vendôme square in Paris, France was built as a tribute to the Sun according to Nostradamus.[10]

During the 18th century, the plant St. John's wort was also known as Solterrestres, meaning the 'Terrestrial Sun', for like the Sun, it was believed to drive off "spirits of darkness".[11] Another flower associated with the Sun was the lotus.[4]

In the early 2010s, during his captivity at Abstergo Industries, Clay Kaczmarek included the Sun in the Glyphs he left behind for his successor to find and solve.[12] The Sun was also referenced in his memories, as circumpunct is a common symbol for the Sun.[13]

The mythological Phoenix bird is associated with the Sun, its life cycle reflecting that of the Sun as seen from Earth, constantly 'dying' and being 'reborn'. 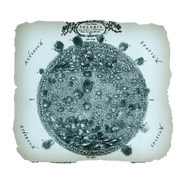