The Strong Man (harvested from: Nukilik) was an Animi Avatar used by the entertainment branch of Abstergo Industries, as part of their plan to influence the general public, via the console stage of the Animus technology. His specialty weapon was a harpoon, which he used as a spear.

Approaching his target, the Strong Man quickly pulls out his harpoon and stabs it into their abdomen. He then cruelly pulls the spear upwards, further opening the newly inflicted wound and causing more blood loss. From there, the Strong Man removes his harpoon, before he watches as his victim falls to the ground.

Casually walking up to his target from behind, the Strong Man pulls out his harpoon, before slashing them diagonally across the spine to the left, followed up by a second slash to the right. He then brutally forces the spearhead through their back, withdrawing his harpoon as his victim collapses to their knees, dying slowly.

Running up to his target, the Strong Man stabs his harpoon deeply into their chest. As they grab ahold of the spear, he takes his hands away from his weapon and spins around, before returning once more to his spear. From there, the Strong Man sadistically rips out his harpoon by pulling on it single-handedly, before performing a second spin and using the momentum to slash his victim across the chest, causing them to fall back to their death.

Rushing over to his target from behind, the Strong Man impales his harpoon into their spine. As they recoil from the pain, he withdraws his spear and springs upwards into the air, subsequently slashing his victim down their spine from their neck, causing them to die of blood loss.

Leaping from above, the Strong Man lands on top of his target, before taking out his harpoon from his back. Using the momentum of his fall, he forces his spear deeply into their chest, after which he removes his weapon from his victim's dead body as he stands, subsequently sheathing it at his back.

The Strong Man grabs his seated target's foot and drags them off the bench, until their head rests against it. Before his victim can do anything to defend themselves, the Strong Man forcefully kicks them in the face, violently sending their head backwards and breaking their neck on the bench behind them.

The Strong Man could be customized in several ways: 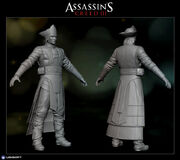 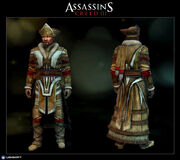 In-game models for the Strong Man

Concept art of the Strong Man, by Antoine Rol