The Stowaway (harvested from: Charlie Oliver) was an Animi Avatar used by the entertainment branch of Abstergo Industries, as part of their plan to influence the general public, via the console stage of the Animus technology. He was available through a system update, and wielded a pair of handguns as his specialty weapon.

The Stowaway had several unique moves:

Facing his target, the Stowaway pulls out one of his pistols and levels it at their face, to which the former manages to react quickly enough to snatch it out of his hand. Undeterred, the Stowaway spins around and uses his second pistol to shoot his victim in the head, killing them. As they fly back from the blow, the stolen weapon flies from their hand and is neatly caught by the Stowaway, who then places both pistols back into his holsters.

Approaching from behind his target, the Stowaway pulls out his pistols and then savagely kicks them in the back of their knee, causing them to kneel in pain. Giving his victim no time to react, he fires a single shot into the back of their neck, killing them instantly.

Facing his target, the Stowaway grabs them by the neck and throws them to the ground, where they clumsily land. As they scramble to get up, they see the Stowaway grabbing his pistols and raise a hand in an attempt to stop him, to no avail. He swiftly fires two rounds into his victim's chest, leaving them dead on the ground, before he holsters his two weapons.

Behind his target, the Stowaway grabs his pistols and uses one to sweep out the legs from under his victim, who lands harshly on the ground. Wasting no time, he fires a round into their heart, killing them instantly, subsequently stashing away his weapons.

Running up to his target, the Stowaway climbs up their knees and propels himself into the air. While in mid-air, he elegantly spins around to shoot his victim in the back, causing them to collapse on the floor in agony. As the Stowaway lands deftly on his feet, he shoots them a final time for good measure, and then returns his guns to their holsters.

Behind his target, the Stowaway grabs ahold of his weapons and then dashes towards his victim. Jumping onto their back, his target loses their balance and falls forward, awkwardly hitting the ground. Defenseless, they turn to look up at the Stowaway standing over them, but are unceremoniously killed with two shots in the back of the head before they can do so.

Jumping down from above, the Stowaway cushions his fall with his target's body, simultaneously immobilizing them. Following this, he aims one of his pistols at his victim's forehead and fires, killing them instantly, before walking away.

Grabbing his seated target's foot, the Stowaway drags them off the bench until their head rests against it. Before his victim can do anything to defend themselves, he forcefully kicks them in the face, violently sending their head backwards and breaking his target's neck on the bench behind them.

The Stowaway could be customized in several ways:

Concept art of the Stowaway

The Stowaway, along with the Shaman and the Siren

The Stowaway chasing the Siren

The Stowaway being killed by the Shaman 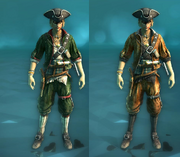 Alternative costumes for the Stowaway

Pirate, Fraud and Warrior costumes for the Stowaway 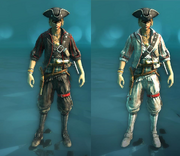 Templar and Assassin costumes for the Stowaway 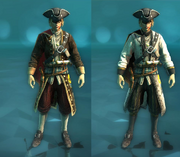 Skipper and Prestige costumes for the Stowaway 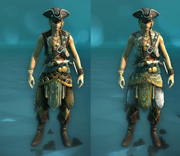 Retrieved from "https://assassinscreed.fandom.com/wiki/Stowaway?oldid=831118"
Community content is available under CC-BY-SA unless otherwise noted.