A Stiletto is a knife or dagger with a long slender blade and needle-like point, primarily intended as a stabbing weapon.

The Italian Assassin Ezio Auditore da Firenze purchased the stiletto from a blacksmith in Florence, Venice, Forlì, San Gimignano, or Monteriggioni,[1] and again during his attempt to erode the Borgia's power in Rome.[2]

The Spanish Brotherhood of Assassins also utilized the stiletto as part of their arsenal, forging it in their hideout in Sierra de Cazorla.[3]

The stiletto knife was often depicted as being used by Ezio in a slashing attack. While this would be unusual for a stiletto, as the weapon was normally designed as a secondary thrusting and parrying weapon to be paired with a rapier or other light sword, some instances of stiletto knives did have sharpened edges for cutting purposes.

The Stiletto is useable by Ezio in Soulcalibur V. 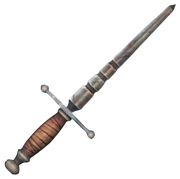 The Stiletto in Rebellion 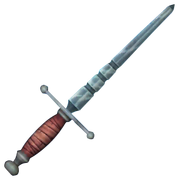 The Fine Stiletto in Rebellion
Add a photo to this gallery

Retrieved from "https://assassinscreed.fandom.com/wiki/Stiletto?oldid=861576"
Community content is available under CC-BY-SA unless otherwise noted.