Assassin's Creed Wiki
Register
Don't have an account?
Sign In
Advertisement
in: Article stubs, Locations in Elis, Locations in the Valley of Olympia,
and 3 more

"Kronos, is that a baby or the Omphalos you're eating?"
―Kassandra[src]

The Statue of Kronos was a monumental statue located within the ruins on top of the Kronion overlooking the Sanctuary of Olympia in Elis, Greece.

Honored in Elis, the Titan Kronos was given his own temple on top of the hill named after him. There, a winged statue of him devouring one of his children was set, and it was offered annual sacrifices at the spring equinox.[1]

During the Peloponnesian War, the statue witnessed the 'trial' of Kallipateira, a widowed woman who had been caught sneaking into the Olympic Games to watch the matches, disregarding the law against it. The case drew the interest of the Spartan misthios Kassandra, who intervened.[2]

The trial of Kallipateira in front of the statue

Concept art of the statue by Hugo Puzzuoli

Concept art of the statue by Hugo Puzzuoli

Concept sculpts of the statue 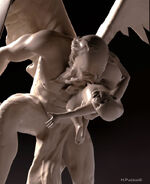