Assassin's Creed Wiki
Register
Don't have an account?
Sign In
Advertisement
in: Articles in need of sources, Articles that need updating, Articles needing expansion,
and 7 more

View source
watch 01:51
Wielding The Spear of Leonidas in 'Assassin's Creed: Odyssey'
Do you like this video?
Play Sound

The Spear of Leonidas, also known as the Blade of Leonidas, was a Spear of Eden[4] wielded by King Leonidas I of Sparta at the Battle of Thermopylae. Following his death, Leonidas' now broken spear was passed on to his daughter Myrrine, and then to his granddaughter Kassandra.

During Kassandra's quest to locate her family and destroy the Cult of Kosmos, Kassandra regularly visited the Ancient Forge to enhance the spear's combat efficiency, structural durability, and supernatural power through the use of Isu Artifact Fragments.

The first known human to wield the spear was the first wife of King Anaxandridas II of Sparta and the mother of Leonidas I. At one point, Leonidas was given the spear by her,[6] and he would use it until his death in 480 BCE at the Battle of Thermopylae. After being broken during the battle, the broken tip was recovered by the Spartans and handed over to Leonidas' daughter Myrrine.[7] Myrrine would in turn hand down the Spear to Kassandra when she was seven years old.[5]

The spear lost its powers during the events on the island of Korfu, where its proximity to an equally-strong Apple of Eden caused it to overload, preventing Kassandra from accessing its special abilities. Once its power was exhausted,[13] Kassandra left the Spear to Herodotus as something to remember her by.[9]

Millennia later during the Italian Renaissance, the Assassin Alessandra d'Avanzago recovered the Spear to prevent it from falling into the hands of the Templars. The Assassins then hid the Spear in a location where they believed it would not be found for a long time.[10]

The Spear was eventually recovered and reburied beneath Herodotus' book Lost Histories, where it laid untouched for centuries until 2018 when both objects were recovered by the Assassin Layla Hassan. Using Kassandra's DNA found on the spear, Layla was able to relieve her memories through the Animus. Once Layla had found Atlantis and met Kassandra, kept alive by the Staff of Hermes Trismegistus, she tried offering the Spear back to her, only for Kassandra to reply that it was broken and that Layla could keep it.[11]

The spear was able to bestow upon its wielder enhanced strength, as well as a myriad of other supernatural abilities. The spear was able to harness its wielder's adrenaline to produce supernatural effects, such as cloaking its user, regenerating health, or harnessing some of the natural elements such as poison and fire. It could even briefly increase the wielder's speed and reflexes, charge arrows with explosive energy, produce shockwaves, and augment arrows so they could phase through walls. While quite literally granting its wielder god-like powers and abilities,[1] with it widely being rumored to contain the strength of the fallen 300 Spartans,[14] the spear did in fact have a finite amount of power and became a normal spear when depleted,[13] though this well of power appeared to be quite extensive as the Spear was liberally used by Leonidas, Myrrine, and finally Kassandra.[1]

The spear effectively replaces the Hidden Blade in-game, and is used as the historical protagonist's main weapon of assassination. As its predecessor, it is also the weapon used to finish off members in the Cult of Kosmos and the Order of the Ancients in much the same way as the Hidden Blade has been used to kill Templars throughout the Assassin's Creed series.

From a gameplay sense, the spear takes reference from the Pieces of Eden encountered in past games; however, the impetus here was to let players wield an Isu artifact throughout the game rather than just at the end of it. It is also the justification for Kassandra's many abilities.[15]

A replica of the spear is available in the Medusa Edition of Assassin's Creed: Odyssey.

In the memory "A Mother's Prayers", even if the spear is upgraded using the Ancient Forge, when Kassandra presents it to Myrrine, it appears in its default, broken state.

The fundamental concept of the Spear of Leonidas is similar to that of the the "Dagger of Time" from Prince of Persia: The Sands of Time, another Ubisoft property. Both are weapons of the gods that provide numerous powers to the protagonist and are dual-wielded with other weapons.

In The Art of Assassin's Creed: Odyssey, the spear's design was said to be based on the Spartan dory but mixed with Isu influences and the desire to "hint the Assassin's logo in the shape design", according to Gabriel Blain.

In Assassin's Creed: Rebellion, both Kassandra and Alexios wield the spear, have almost the same background story in their biography, and can even be selected to play memories together, but the spear gives them different powers. For Kassandra, it grants her control over poisons and the ability to see through walls to find the objective, known as "Athena's Sight", while Alexios gains control over fire, known as "Hephaistos's Fire".

From the way it is used, and judging by its design, the Spear seems to be inspired by the Zulu Iklwa.

In the crossover event between Assassin's Creed: Odyssey and Assassin's Creed: Valhalla, Eivor Varinsdottir travels to the Isle of Skye where she acquires the Spear of Leonidas from a chest. Its appearance in a pre-destroyed state indicates that the spear she acquired is non-canonical. 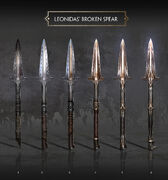 The broken Spear laying beside the recently deceased Leonidas

The Spear's mold in the Ancient Forge

The Spear as it appears in Rebellion