Arno: "The people are fighting for what is owed them. Liberté, égalité..."
Trenet: "If we danced about on a simple scale in need of balancing, you'd be right. But the truth is more complicated."
—Arno and Trenet discussing the French Revolution, 1792.[src]

Sophie Trenet was a French Master Assassin and member of the Assassin Council that led the Parisian Brotherhood during the French Revolution. She was also a playwright, essayist and pamphleteer who fought with passion for the freedom of the oppressed classes.[1]

Beylier: "The truce was with Grand Master de la Serre."
Trenet: "The man's been dead for two years! Whoever is in charge now, you can be certain they aren't sitting idle."
—Trenet and Beylier on the Templars' activities, 1791.[src]

Little is known of Trenet's early life and how she came to be an Assassin. By 1789, she had gained a position on the Assassin Council, which directed the Brotherhood's activities in Paris. With the approaching French Revolution, the council endeavored to keep the peace and decided to form a truce with the Parisian Rite of the Templar Order through their Grand Master François de la Serre to achieve this.[2]

Although de la Serre was murdered shortly thereafter, the council continued to operate under the assumption that the truce was being honored. On 25 July, Trenet was present during the induction of Arno Dorian into the Brotherhood. She voiced her doubts at Dorian's guilt weighing on him to Pierre Bellec, he quashed her worries.[3]

In early 1791, when Arno brought evidence that Templar Charles Gabriel Sivert was extorting money from nobles for an unknown purpose, Trenet and the others realized their mistake at assuming the truce was held and gave Arno permission to track down de la Serre's killers.[2]

However, Arno's zeal in this matter caused him to pursue targets without the council's permission. Trenet, along with her fellow council members, was outraged at this, though Mirabeau managed to calm them down. Tensions worsened when Arno brought his lover and Templar Élise de la Serre to the Assassin headquarters underneath the Sainte-Chapelle - Mirabeau saw in this an opportunity to renew the truce, but Trenet and the other council members opposed the idea.[4]

Shortly thereafter, Mirabeau was poisoned by Pierre Bellec, who saw Mirabeau's push for peace as treason against the Assassin Order.[5] In a subsequent confrontation with Arno, Pierre also died, leaving the council deprived of two of its members.[6] Thereafter, chairmanship of the Assassin Council fell to Trenet.[7]

"You've defied the orders of this Council repeatedly, pursued targets without sanction, and flouted our Creed at every step [...] In light of these actions, I find I have no choice but to call for a vote of expulsion."
―Trenet about to banish Arno from the Brotherhood of Paris, 1793.[src]

In the aftermath of Mirabeau's death, Trenet and the others uncovered his correspondences with King Louis XVI. To prevent copies of these letters from falling into the hands of the Templars, she sent Arno to the Tuileries Palace to find and destroy them. While he succeeded in this task, Arno continued to pursue François-Thomas Germain and his accomplices, which the council had expressly forbidden him from doing.[7]

After the execution of Louis XVI in 1793,[8] the council confronted Arno about his actions. Trenet lambasted him for his selfish reasons for joining the Brotherhood and the manner in which he repeatedly acted outside the tenets of the Creed, brashly killing targets without the council's consent. Though showing some reluctance, she nevertheless called for a vote of expulsion. With the approval of Hervé Quemar and Guillaume Beylier, she banished him from the Parisian Brotherhood.[9] Arno would ultimately be welcomed back, however, after he later reformed and demonstrated true fidelity to the Creed.[10]

Decades later, Trenet played an important role in events that led to the rise of the French Second Republic in 1848.[1]

Trenet could speak Arabic, as demonstrated when she conversed in it with Bellec during Arno's induction.[3] 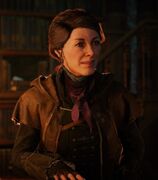 Trenet with her fellow council members