Assassin's Creed Wiki
Register
Don't have an account?
Sign In
Advertisement
in: Social media citations without screenshots, Articles in need of sources, 878 deaths,
and 6 more

Soma (died 878) was a Viking jarlskona whose clan was based in Grantebridgescire, England during the 9th century. Her clan pledged their assistance to Eivor Varinsdottir after she helped to reclaim the region from the Order of the Ancients.

A Sámi from northern Scandinavia, Soma grew up an orphan and later joined the army of the Viking leader Guthrum. When the invaded England, Soma joined Guthrum and the Ragnarssons' Great Heathen Army, during which time she grew close to Guthrum and Ubba Ragnarsson. Eventually, Soma rose up the ranks and became jarlskona under Guthrum, co-leading the Great Summer Army in Grantebridgescire.[2] Following the capture of Grantebridge from Mercia, Soma volunteered to defend the city, allowing Guthrum to continue southwards to invade Wessex. In time, Soma turned Grantebridge into a prosperous city and gained three close advisors in Birna, Galinn, and Lif.[3]

In 873, Grantebridge came under frequent failed assaults by the Mercian nobleman and Order of the Ancients Palatinus Wigmund, who used the Order's resources to raise an army and attempt to drive out the Vikings.[4] Eventually, Wigmund succeeded after being shown a secret tunnel connecting the city longhouse to the outside of the walls by a traitorous Galinn. This allowed Wigmund to lead his army into the city, thus driving out Soma's army.[5] Soma was forced to retreat to a small settlement called Middeltun, while her advisors were scattered throughout the swamps of Mercia.[4]

Later on, Soma was greeted by Eivor Varinsdottir of the Raven Clan, who had been directed to Soma by one of her men, Magni, who sought refuge at the old Roman ruins of Duroliponte. Eivor aided Soma by lighting up a fire signal before proceeding to locate her advisors and bring them to safety.[6]

Having regrouped her army, Soma launched an assault on Grantebridge once again, this time with aid from Eivor. While she succeeded in eliminating Wigmund's lieutenant and retaking the city, Wigmund managed to escape and fled to the Isle of Ely Monastery through the longhouse tunnel. The next morning after a feast and celebration, Soma showed the longhouse tunnel's entrance to Eivor, indicating her suspicions towards her three advisors who helped her to built the tunnel. Soma requested Eivor's aid to investigate and identify the traitor so she could deal with the culprit personally.[5]

Sometime thereafter, Soma answered Eivor's call in Sussex to rescue her brother Sigurd, who had been captured by Order Maegester Fulke. [citation needed] 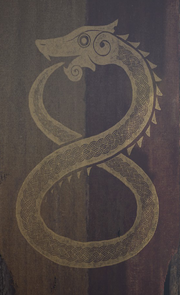 Soma being killed during the Battle of Chippenham

Soma is a character that appeared in Assassin's Creed: Valhalla. She is voiced by Swedish actress Kajsa Mohammar, who also voices Randvi in the game.[7][8]

If players started the free Oskoreia Season event before completing the memory "Holy Day", they can find Soma's name and a one-line memorial carved into the decorated longship in Ravensthorpe commemorating the deceased, as her death in unavoidable in the main storyline.