Assassin's Creed Wiki
Register
Don't have an account?
Sign In
Advertisement
in: Articles that need updating, Articles in need of sources, 470 BCE births,
and 9 more

Sokrates (c. 470 BCE – 399 BCE), alternatively Socrates,[1] was an ancient Greek philosopher from Athens who is credited as one of the founders of Western philosophy. He was the teacher of Plato and Alkibiades.[2]

Kassandra: "Who are you?"
Sokrates: "Ask anyone and they'll tell you Sokrates, but a name gives you nothing. Our actions determine who we are, and every action has its pleasures and its price. With that said, then, who do you claim to be?"
—Sokrates meeting Kassandra, 431 BCE.[src]-[m]

Sokrates was the teacher of Alkibiades, a relative of Perikles who ruled Athens during the golden age. In time, he became part of Perikles' inner circle, befriending numerous intellect individuals.[3] In 431 BCE, Sokrates was present at the Bouleuterion of Athens, witnessing his mentor and fellow philosopher Anaxagoras being ostracized from the polis through a vote. There, Sokrate met the misthios Kassandra, aware then she manipulated the votes which led to Anaxagoras's ostracism. Sokrates later bid the misthios farewell to attend an upcoming symposium at Perikles' residence.[4]

Later on at the symposium, Sokrates participated in a debate on the nature with rulers with Thrasymachos. The two were later greeted by Kassandra, who managed to gain access to the symposium by helping Perikles with various errands. They were soon interrupted with arrival of Aspasia, Perikles' partner.[3]

During the Peloponnesian War, Sokrates visited the Silver Islands around the same time as Kassandra. He posed her a dilemma.[5]

After the rebellion had overthrown the Athenian rule on the Silver Islands, Sokrates joined the celebrations, talking with interested citizens.[6]

During the plague in Athens, Sokrates was observing the situation and people there. He witnessed the death of Perikles and decided to remain in the city in order to oppose the rhetoric of Kleon, the new leader of Athens.[7]

Later around 425 BCE, Sokrates, alongside Aristophanes, assisted Kassandra in tarnishing the reputation of Kleon, a Sage of the Cult of Kosmos who had taken power following Perikles' death in 429 BCE.[8]

In 1511 or 1512, the Assassin Mentor Ezio Auditore da Firenze retrieved a copy of Aesop's Fables in Constantinople attributed to him.[1]

As an exceptional rhetorician who dominated political debates, Sokrates earned the respect of the intelligentsia of Athens. He was a fervent advocate of the democratic principles of his native state,[2] and his prolific contributions to the philosophical tradition of Greece has left a lasting legacy which continued to reverberate as late as the days of the Ottoman Empire and beyond.[1] Outspoken and courageous, he also boasted an extraordinary capacity for liquor.[2]

Sokrates is a historical figure introduced in the 2018 video game Assassin's Creed: Odyssey, where he was voiced by Daniel Matmor.

Sokrates was famous for having introduced the Socratic method, a form of argumentative dialogue which employed a process of question and answering to draw out underlying presuppositions in one's beliefs. His interactions with the player in Odyssey as a friend of the protagonist recreate his notorious habit of subjecting friends and strangers everywhere to this method of inquiry. Key to his approach was not to assert normative claims himself but to stimulate critical thinking and discover logical contradictions no matter the other party's position. [citation needed] True to this, in various moral dilemmas the player finds themselves in across the game's quests, no matter the player's choice, Socrates will question their reasoning in a way that may come across as contrarian.

Much of what we know of Socrates, his philosophy, and his behavior comes from the works of his pupil, Plato, who immortalized him. His Socratic dialogues, most notably Apology, relates how Socrates earned the ire of a significant segment of Athenian society through his Socratic method, and this led to his trial for impiety and corruption and execution in 399 BCE. [citation needed] 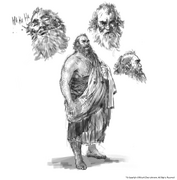 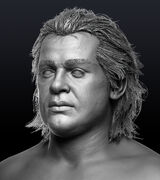 Sokrates at the party on Mykonos

Sokrates in Athens during the plague