Sobek is an ancient Egyptian god associated with crocodiles as well as pharaonic power, fertility, and military prowess. A protective deity who was believed to shield the innocent from the dangers of the Nile, Sobek was widely worshipped by ancient Egyptians, but especially in the Faiyum Oasis where a large temple in Krokodilopolis served as the center of worship. It housed Petsuchos, the embodiment of the god.

At some point before 48 BCE, a cult of Sobek arose in Krokodilopolis, but it was soon corrupted. The cult fed civilians to crocodiles in secret 'parties' held by the Embalmer, called Sobek's Secret Feasts[1], they had the tame crocodiles at the Temple of Sobek, especially the great albino Petsuchos, poisoned by Melina the Hibiscus[2], and even slaughtered crocodiles and used their badly mummified corpses to smuggle gold and valuables.[3] At the center of all these schemes was Sehetep, the High Priest of the Temple of Sobek, the leader of the cult. In due course, the Medjay Bayek of Siwa discovered the cult, and ended its practices, one after the other.[4]

In 2017, whilst Layla Hassan was exploring the 's memories in the portable Animus HR-8, an emotion sensor overload in the device resulted in a manifestation of Sobek that she needed to combat in order to protect Animus data.[4] 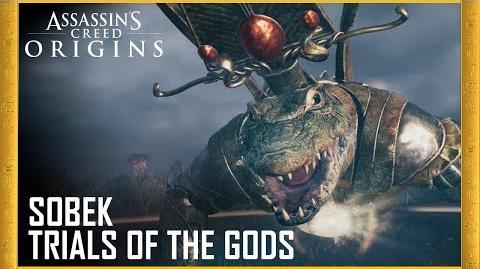 Petsuchos with Berenike
Add a photo to this gallery

Retrieved from "https://assassinscreed.fandom.com/wiki/Sobek?oldid=762515"
Community content is available under CC-BY-SA unless otherwise noted.