Piri: "Ah! Turkish smoke bombs. Are you curious to try a few?"
Ezio: "Should I? I have used smoke bombs before, with varying results."
Piri: "But not like ours. We have a special recipe for deep, dark clouds. Throw one of these and your eyes are useless. You must rely on your hearing, and... any other senses you may have cultivated."
—Piri Reis, describing a smoke screen bomb to Ezio.[src]

A smoke screen bomb, also known simply as a smoke bomb, is a non-lethal explosive device which emits smoke upon ignition. As its name implies, its primary function is to create a smoke screen to conceal movement and disorient enemies. Depending on the design, a smoke bomb may momentarily incapacitate targets caught in its field rather than simply hampering vision. For this reason, a smoke bomb is a basic yet highly effective tool for stealth operations which can be employed for tactical retreats, escapes, or even offensively in combat and assassinations.

Smoke screen bombs have been used by the Assassin Brotherhood since their founding as the Hidden Ones in 47 BCE,[1] and the bombs remain a regular and indispensable part of their arsenal to this day.[2] Although stealth is not as central to their modus operandi as it is to their archenemies, the Templar Order have also trained their agents to rely on smoke bombs when necessary, most notably as a last ditch escape from assassination.[3][4][5][6]

Upon detonation, a smoke screen bomb produces a cloud of smoke dense enough to obscure all vision such that absent special gadgets or Eagle Vision, it is impossible for the human eye to penetrate the fog.[7] Typically, the smoke is so debilitating that it affects more than just sight, disorienting unprepared individuals by suffocating them. Because the smoke is not commonly designed to last for more than several seconds before dissipating, no permanent ill effects are dealt to those breathing the gas.[7][8][9]

As a result, the smoke bomb is a fairly simple yet enormously versatile explosive device ideal for stealth operations. Its foremost function is to facilitate disengagement from conflict through concealment, permitting quick escapes or tactical retreats.[1][7][8][9][10][2] However, it may also be used offensively to incapacitate groups of enemies, creating an opening for unimpeded engagement. In an age of fully automatic, high-calibre firearms, this may be necessary for outnumbered, under-equipped Assassins to close the gap against special forces.[2]

Aside from combat or escapes, smoke bombs are potent tools for assassination or counter-assassination. Similar to the aforementioned techniques, Assassins have relied on smoke bombs to stun powerful enemies for added insurance before approaching with their Hidden Blade.[10][11][12][2] Owing to their history as casualties of such assassinations, Templar recruits who participated in the 2011–2014 Animi Training Program learned to deploy last-second smoke bombs at the approach of enemy assassins, providing them the needed opportunity to counter-attack or escape.[3][4][5][6]

The non-lethal nature of smoke bombs ensures that operatives deploying it have greater control over the injury they inflict on enemies in hostile environments, providing the opportunity for them to avoid killing altogether.[11][12][2]In crowded, public areas, this is especially vital as it permits Assassins to engage or disengage without harming innocent civilians in accordance with their strict Creed.[7]

The smoke bomb crafted and employed by the Assassins has historically utilized white phosphorus as its main component.[7] Under the Ottoman Brotherhood, smoke bombs were created, like other bombs in their arsenal, with either impact bomb casings or fuse bomb casings. These alter the design of the bomb such that it either detonates upon impact or after a short delay upon ignition, where the former emits a near-instantaneous burst of smoke and the latter a slower stream. Alternatively, the explosive components were encased in a sticky pouch or modified into a trip mine instead, creating smoke bombs which stuck to a target for greater precision before engulfing it or which could only be set off by an unwitting trespasser.[7]

Although gunpowder was not discovered until circa 850 by the Chinese,[13] smoke bomb technology was already well known to the Medjay in the 1st century BCE.[1] Prior to founding the Hidden Ones in 47 BCE, the Medjay Bayek of Siwa made prolific use of smoke bombs throughout his campaign to eradicate the Order of the Ancients in the midst of the Alexandrine Civil War.[1]

From the Hidden Ones, the technology passed on, relatively unchanged, to the Levantine Assassins. In 1190, the Master Assassin Altaïr Ibn-La'Ahad relied on smoke bombs to evade the first Crusader soldiers who spotted him within the city walls at the Siege of Acre. Later that year, he utilized smoke bombs again when forced to evade his own brethren upon returning in secret to the Assassins' Alep Citadel to assassinate the traitor Harash.[8]

In 1478, mercenaries under the employ of Italian Assassin Mario Auditore provided his nephew, Ezio Auditore da Firenze, with smoke bombs in advance so that he may have an easy escape after assassinating Pazzi conspirator Stefano da Bagnone at the Abbey of Monte Oliveto Maggiore.[14] As expected, the devices proved beneficial to Ezio, and from then on, he regularly purchased smoke bombs from blacksmith shops throughout his career as an Assassin, for despite their paramilitary use, they were normally supplied by blacksmiths throughout Italy during this period.[14][9]

Conversely, blacksmiths in the Ottoman Empire in the early 16th century did not sell smoke bombs, and the Ottoman Assassin generally had to craft them themselves, a fact that was taught to Ezio upon his arrival to Constantinople to lead the Ottoman Brotherhood against the Byzantine Rite of the Templar Order. He received a refresher course from the Assassin explosives expert Piri Reis on the smoke bomb, testing it out on a nearby church courtyard to steal bomb ingredients stashed there.[7][15]

Lydia Frye, the granddaughter of Jacob Frye, used smoke bombs in the war-torn London of 1916.[16]

In October 2015, when Assassins Galina Voronina, Shaun Hastings, and Rebecca Crane were pinned down by Abstergo Industries' Sigma Team at the Buckingham Palace vault without a firearm, Galina deployed a smoke grenade, a critical tactic which allowed her to close the gap against the enemy commandos and slaughter them all. This allowed the three to escape, albeit without the Shroud of Eden they had just fought the Templars Isabelle Ardant, Juhani Otso Berg, and Violet da Costa for.[2]

Unlike in previous games, the smoke bombs cannot be purchased from blacksmiths in Assassin's Creed: Revelations but must be crafted instead like all other bombs. By killing a guard while they're caught in a smoke screen bomb, the achievement I can see you" can be earned.

In Brotherhood and Revelations, the smoke bomb is one of the most powerful and ubiquitous abilities and is used not just an easy counter against assassinations, but for assassinations as well, a tactic popularly termed offensive smoke bomb (OSB) by the multiplayer community. In the latter usage, the 4.0 second duration of the Long Lasting Smoke Bomb in Brotherhood can give a free focus poison kill.

A common strategy with the smoke bomb is to bait opponents either by exposing oneself conspicuously or by remaining in hiding but feigning ignorance to the approach of the pursuer.

Counters to the smoke bomb involve techniques used to evade being caught in the cloud or to prevent its usage entirely. These tactics include using abilities such as Mute/Wipe which directly inhibit usage of any abilities for a short duration or Hidden Gun/Pistol to shoot down the target from a distance at the cost of a high score. Since the smoke bomb only has a horizontal blast radius, absent any abilities, a player can counter with an air assassination, anticipating an opponent's use of the smoke bomb and approaching from a higher elevation.

Owing to its overpowered reputation, the smoke bomb received incremental nerfs from Revelations to Black Flag. In Revelations, this was minor where the maximum duration of the smoke with upgrades was reduced from 4.0 seconds to 3.8 seconds. Further nerfs to range, cooldown, activation time, and duration in III and Black Flag, however, led to the smoke bomb virtually becoming obsolete after losing much of its popularity to throwing knives and other abilities.

The variants of the smoke screen bomb 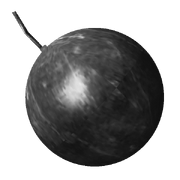 A smoke bomb from Italy
Add a photo to this gallery

Retrieved from "https://assassinscreed.fandom.com/wiki/Smoke_screen_bomb?oldid=860334"
Community content is available under CC-BY-SA unless otherwise noted.