A sledgehammer is a tool with a large, flat, often metal head, attached to a long handle. As the shape of its head allows it to apply more force than other hammers, it came to be used as a weapon since at least the 5th century BCE.

During the Peloponnesian War, the Spartan misthios Kassandra commonly found this mace in the inventories of blacksmiths and looted it from bodies and chests during her travels throughout Greece.[1]

By the Renaissance, the use of sledgehammers were still common. During the 16th century, Ezio Auditore da Firenze could purchase the sledgehammer from any blacksmiths in Constantinople.[2] 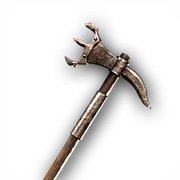 A sledgehammer in ancient Greece

Kassandra wielding a sledgehammer
Add a photo to this gallery

Retrieved from "https://assassinscreed.fandom.com/wiki/Sledgehammer?oldid=874574"
Community content is available under CC-BY-SA unless otherwise noted.