Skylla was a monstrous creature in Greek mythology, said to haunt a narrow channel with Charybdis on the other side of it. She was depicted as a monster, with mouth full of sharp teeth, a spiked tail, and a waist whence sprouted canine heads.

In Homer's Odyssey, Skylla and Charybdis were encountered by the hero Odysseus and his crew as they travelled through the channel. Odysseus was advised by the sorceress Circe to sail at full speed closer to Skylla, due to Charybdis being more dangerous and was capable of sinking the entire ship. Odysseus followed her advice, and although he lost six of his men, the ship was able to escape and pass through the channel with no further casualties.[1]

During the 5th century BCE, a promontory and region of Argolis on the Peloponnese was named after Skylla. Murals depicting Odysseus' encounter with the creature could also be found on buildings throughout Greece.[2]

Skylla was also briefly mentioned by Herodotos and Barnabas as their ship, the Adrestia, approached the island of Keos. Herodotos joked about Barnabas' suggestion for carefulness with a comment about Charybdis and Skylla waiting at the bottom of the sea. Barnabas corrected that the reason for care were the pirates patrolling the seas around the islands.[2]

The pirate ship Shadowed Nymph bore Skylla's image as her figurehead[2], and Phila, a member and a magi of the Order of the Storm, commanded a trireme named after Skylla during the Peloponnesian War.[3] 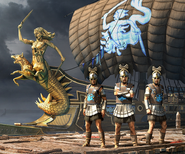 The Naval Pack for Adrestia

The sails featuring Skylla
Add a photo to this gallery

Retrieved from "https://assassinscreed.fandom.com/wiki/Skylla?oldid=835633"
Community content is available under CC-BY-SA unless otherwise noted.