The Assassin-turned-Templar Shay Cormac wore several sets of robes throughout his life. In addition, over the course of the Seven Years' War, Shay acquired several sets of armor.

Shay wore these robes as a member of the Colonial Brotherhood of Assassins.

The robes featured a white hood, which Shay kept down when not on missions, a white undershirt with the torso bearing an open collar and the robes themselves, which were grey. The upper body also featured a shoulder belt, which holstered Shay's Air rifle at the back.

The lower part of the robes were doubly layered and about equal in length. The back of the lower portion formed an Assassin insignia. The waist featured a red sash with a square pattern which was fastened by a belt which featured Yggdrasil. The belt held a single pouch and two pistol holsters on the right hip.[1]

These robes were given to Shay by Barry and Cassidy Finnegan after they nursed him back to health following his fall from a cliff whilst escaping the Assassins. The robes originally belonged to the Finnegans' late son, who was a Templar agent.

The attire was similar to Shay's Assassin robes, consisting of a yellow undershirt, with the torso bearing an open collar, and the robes themselves being grey. There was also a grey shirt beneath his undershirt. The shoulders each displayed a cross containing triquetras. The upper body once again featured a shoulder belt which holstered Shay's Air rifle at the back, whilst the front displayed a Templar insignia.

The lower part of the robes featured a belt around the waist. The belt once again featured Yggdrasil and held four pouches as well as two pistol holsters on the right hip.[1]

Shay wore these robes as a member of the Colonial Rite of the Templar Order.

The robes showed similarity to the interim robes in its design, although more ornate in appearance. The robes were grey with a red interior, maintaining an open collared torso and a grey shirt beneath. The shoulders continued to each display a cross with triquetras and upper body now featured two shoulder belts, with the larger belt continuing its function of holstering Shay's Air rifle as well as featuring a Templar insignia at the front.

The lower part of the robes continued to feature a long layered lower section and the waist featured a yellow sash, which was red along the edges and displayed a cross. The sash was fastened by a belt which once more featured Yggdrasil and held six pouches as well as two pistol holsters on the right hip.[1]

These robes were worn by Shay later in his life. He wore these sometime prior to his arrival in Versailles.

The robes were similar to Shay's previous set in terms of shape. The attire was ornate in appearance, consisting of a white undershirt with a white tie and the robes themselves, which were a lighter shade of grey compared to Shay's previous robes and had a blue interior. The shoulder pads displayed Celtic knots at the front and back. The robes additionally featured an open collared torso and a shoulder belt which connected with the belt on the waist.

The lower part of the robes once again featured a long layered lower section. The waist featured a red sash, which was fastened by a belt which held six pouches and two pistol holsters.[1] 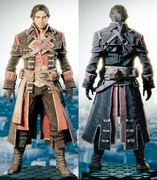 Shay's Templar robes as seen in Assassin's Creed: Unity
Add a photo to this gallery

Retrieved from "https://assassinscreed.fandom.com/wiki/Shay_Cormac%27s_robes?oldid=738312"
Community content is available under CC-BY-SA unless otherwise noted.