Shards of Eden are leftover fragments of Isu technology maintaining some of the power of the Pieces of Eden. The Shards are capable of possessing qualities of various different Pieces of Eden, such as Staves or Rings.

The Mayans created an armor out of scavenged Shards possessing the magnetic qualities of the Rings of Eden. The armor was recovered from Tulum by the pirate-turned-Assassin Edward Kenway at some point around 1721.[1]

When the Russian Imperial Scepter, a Staff of Eden, was destroyed during the Tunguska explosion, one shard of the artifact survived the blast and was later retrieved by Grigori Rasputin. He proceeded to use it to influence those around him, including the Imperial Romanov family. After his death, he was buried with the artifact, and it was retrieved by the Assassin Nikolai Orelov in late 1917.[2] 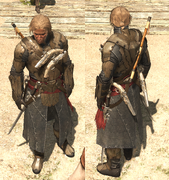 Retrieved from "https://assassinscreed.fandom.com/wiki/Shards_of_Eden?oldid=807503"
Community content is available under CC-BY-SA unless otherwise noted.