Shaqilat was a Nabatean member of the Hidden Ones who operated in the Sinai during the 1st century BCE.

During the late 1st century BCE, Shaqilat and her husband resided in the Sinai, which came under Roman occupation. After her husband was crucified by the Roman legate Tacito, Shaqilat dedicated herself to liberating the slaves at the Klysma Quarry from the Romans.[1]

In 38 BCE, Shaqilat attacked a slaver's barge, freeing the children and bringing them to a courtyard in the quarry. Her actions caught the attention of Osorkon, a member of the Hidden Ones who attempted to follow her but was captured.[1]

The Hidden Ones Mentor Bayek later rescued Osorkon, allowing him to provide intel on the whereabouts of Shaqilat. When Bayek arrived at the courtyard, he assisted her in eliminating the Romans attacking the residents. Bayek, impressed by her skills and virtues, convinced her to join the Hidden Ones. Shaqilat, despite her doubts, ultimately accepted the offer and performed a Leap of Faith into a haystack. Bayek later directed her to the Hidden Ones bureau where she would attend a ceremony celebrating her pledge.[1]

After the destruction of the bureau in Klysma Nome and assassination of Rufio, Shaqilat and the rest of the Hidden Ones moved to a new bureau situated in a cave in the mountains behind Arsinoe.[2]

After Gamilat's death, Shaqilat was present with the Hidden Ones when the Mentors Bayek and Amunet laid down the tenets of their creed.[3] 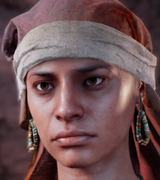 Shaqilat with the Hidden Ones in the mountains bureau