Shadya (died 48 BCE) was the young daughter of Hotephres, an informant of Apollodorus, and his wife Khenut. She lived in a villa in Euhemeria with her parents.

In 48 BCE, a ledger which Hotephres had stolen from a Greek magistrate came into Shadya's possession. The ledger was believed to reveal the identity of the member of the Order of the Ancients known as the Crocodile, and more. In retaliation for the theft, Shadya and Khenut were seized by soldiers under the Crocodile's orders, and brought to Euhemeria's lighthouse. Shadya was executed by the Crocodile, who weighted down her feet with rocks and submerged her in the waters near the pier, leaving Shadya to drown; the Medjay Bayek of Siwa helped later to recover Shadya's body.[1]

Shadya's death devastated her parents, so much so that even though Hotephres at first believed all to be over, anything anyone could do anymore to be in vain, Bayek managed to change his mind, and at least help the Medjay pursue the Crocodile and the Order. Hotephres directed the Medjay to the Gladiator Arena in Krokodilopolis to begin his hunt. After fighting his way to the champions of the arena, Bayek eventually discovered the identity of the Crocodile to be Berenike, the nomarch of Faiyum, and assassinated her in the Kerkesoucha Granary.[2]

A gentle and innocent soul, Shadya held an intense love for feeding the fishes, which was something she did with her parents often. Following Shadya's death, her mother, Khenut, wished for her daughter's spirit to swim forever free in the Nile as "her little tadpole". [3] 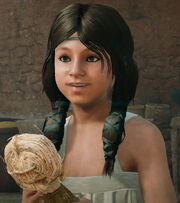 Shadya's doll, Iset
Add a photo to this gallery

Retrieved from "https://assassinscreed.fandom.com/wiki/Shadya?oldid=837151"
Community content is available under CC-BY-SA unless otherwise noted.