In a well near Edfu, Egypt

The Scepter of Aset, or Piece of Eden #24, was an ancient artifact of First Civilization origin, which conferred charisma and leadership to its wielder. It belonged to Isis, also known as Aset, a member of the First Civilization.

The Scepter was originally owned by Isis, a famous member of the First Civilization deified by the ancient Egyptians. By the mid-1st century, the Scepter and the Ankh were in the hands of Lugos, who was a founding member of the Liberalis Circulum, an earlier iteration of the Brotherhood of Assassins. Unfortunately, the Piece of Eden was lost in a shipwreck off the coast of a small island in the Mediterranean Sea.[2]

The Scepter of Aset reappeared over a thousand years later, when anonymous Italian fishermen found it amid the debris of Lugos' ship, in the early 13th century. Subsequently, the fishermen sold the artifact for a very low price to an Egyptian merchant, who in turn sold it to members of the Egyptian Brotherhood of Assassins, who kept the artefact in their possession for half a century. In 1250, still in Egypt, the Brotherhood gave the artifact to the Mamluks in an effort to help them in their slave revolt against the rule of their Ayyubid overlords.[2]

The Scepter remained for nearly a century in the possession of the Bahri dynasty Sultans, placed in power by the revolt of the Mamluks, until 1340 when the Templars stole it from the Sultan Al-Nasir Muhammad. The Assassins then entrusted one of them, Numa Al'Khamsin, with the task to find the artifact, which could be a dangerous weapon in the hands of the Templars.[2]

Some time later in 1341, Numa Al'Khamsin and his disciple Ali Al-Ghraib retrieved the Scepter from the Templars. However, instead of returning to the Sultan's Palace, the artifact stayed in Assassin' hands. Because of his distrust to the Sultan's deputies, Numa was imprisoned.[3]

In the meantime, the Scepter was guarded by Numa's apprentice Ali. The Templars in their turn had tortured Ali and set up a trap to kill Numa. Upon his return, Numa was ambushed and killed by the Templar agent Leila. Ali however, was spared and escaped with the Scepter hidden under the bandages around his arm. The boy then decided to throw the Scepter in a well near Edfu. Despite a failed attempt by Leila to retrieve the artifact, the Scepter remains there until today.[4]

An ancient wall painting of the Scepter of Aset 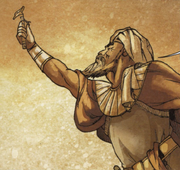 A Mamluk using the power of the Scepter

Retrieved from "https://assassinscreed.fandom.com/wiki/Scepter_of_Aset?oldid=802965"
Community content is available under CC-BY-SA unless otherwise noted.