Saracens was a term employed by Christian Europeans whose meaning evolved throughout the centuries, but which ultimately came to refer to the Muslim Arabs during the Middle Ages: most notably, it described the Islamic armies who fought against the Crusaders in the Crusades. 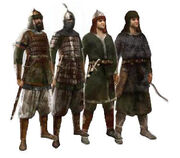 Retrieved from "https://assassinscreed.fandom.com/wiki/Saracens?oldid=850010"
Community content is available under CC-BY-SA unless otherwise noted.