Santa Lucia is a sovereign island country located in the Caribbean Sea and part of the Lesser Antilles.

A small fishing village was located in Santa Lucia, serving as a resupply hub for pirates. In 2013, the village was used as a simulated location created by Abstergo Industries' entertainment branch, for the console stage of their Animus technology.

The simulation depicted Santa Lucia as an exotic and lively fishing village. The town almost entirely consisted out of small, wooden shacks which were covered by branches or palm leaves on the roofs. Near the beach, a ship was in the making and the surrounding cabins served as workplaces. On the shores fishermen could be found on long, rickety docks and pirates were also present, playing instruments or singing shanties. In the center of the village was a big, wooden cabin, which served as a trading hub for the townspeople.

With the implementation of new technology, simulated locations in the console stage were upgraded to have multiple aesthetic variations, as well as dynamic weather. Because of this, Santa Lucia could be utilized during the day, the night, or amidst rain.

References for creating the beach

A ship in production

A workplace
Add a photo to this gallery

The Cutthroat chasing the Puppeteer through Saint Lucia 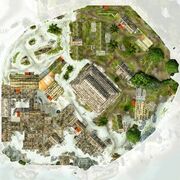 Retrieved from "https://assassinscreed.fandom.com/wiki/Santa_Lucia?oldid=792773"
Community content is available under CC-BY-SA unless otherwise noted.