"The Sanctuary of Delphi. The gods themselves watch over this land."
―Kassandra visiting the sanctuary, 431 BCE.[src]

The Sanctuary of Delphi, or simply Delphi, is best known as the ancient home of an Oracle of Apollo. Located on the slopes of Mount Parnassos in Phokis, Greece, the sanctuary houses the Temple of Apollo where people sought an audience with the Pythia.

Due to the Oracle's presence, as well as for being regarded as the 'Navel of the World', the Sanctuary of Delphi housed many gifts brought by people either seeking or thanking for the Pythia's guidance. These included, but were not limited to, the monuments of Epigones[1] and Militiades,[2] the Naxian Sphinx,[3] the Korkyraean Bull,[4] and Tripods of the Deinomenids.[5]

King Laios of Thebes was on his way to the Sanctuary when he met his son Oedipous, who slew him.[6]

In the late 7th century BCE, Battus I of Thera visited the sanctuary to seek advice on various matters, including one on his home, which had been plagued with a severe drought with no rain for seven years. The Pythia gave him a prophecy, tasking him to travel to Libya to establish a city on advice from Apollo. Following her advice, Battus led a group of Therans to Libya, founding the city of Cyrene and the colony of Cyrenaica.[7]

In 480 BCE, King Leonidas I of Sparta consulted the Pythia at the sanctuary. Along with the Pythia, several members of the Cult of Kosmos warned Leonidas about waging war with King Xerxes I of Persia, who had begun an invasion of Greece. Leonidas defied the Pythia and the Cult, calling for Dienekes to ready his men for battle.[8]

Decades later during the Peloponnesian War, Leonidas' granddaughter Kassandra visited the Sanctuary as well at the suggestion of her friend Barnabas.[9] During the time in the sanctuary, Kassandra became acquainted with residents such as Auxesia and Koragos,[10] as well as reunited with a former Kephallonia friend, Photios.[11]

According to Greek legend, the sanctuary was named at the behest of the god Apollo, who appeared to the priests in the shape of a dolphin.[12] 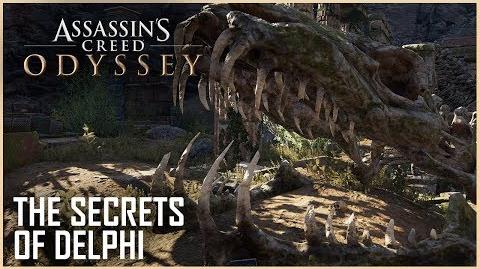 The sanctuary in the evening

Retrieved from "https://assassinscreed.fandom.com/wiki/Sanctuary_of_Delphi?oldid=892820"
Community content is available under CC-BY-SA unless otherwise noted.