San Gimignano is a city located in the Tuscan region of Italy, and was the site of a medieval fortress during the Renaissance.

Named after Saint Geminianus, who supposedly conjured up a dense fog to save the city of Modena from Attila the Hun, San Gimignano was founded in the 3rd century. The city grew from the 10th century onward as a stopping point along the pilgrimage route to Rome.[1]

In 1199, once its citizens had grown wealthy, San Gimignano separated from the bishops of Volterra and became self-governing. The city's distinctive towers were created in the competition between its wealthy citizens, who wished to display how much money they had. In its prime, the city had 72 towers.[1]

However, the plague of 1348 decimated San Gimignano. Without money for upkeep, the town began to fall apart. The council appealed to Florence for help, and Florence took control.[1]

In 1478, the Assassin Ezio Auditore da Firenze traveled to San Gimignano to spy on a clandestine Templar meeting, and to kill Vieri de' Pazzi with the assistance of Mario Auditore's mercenaries.[2]

The Templars present at the meeting, including Grand Master Rodrigo Borgia, Francesco de' Pazzi, Jacopo de' Pazzi, and Vieri de' Pazzi, discussed the plot to end the House of Medici and take control of Florence. Once the meeting had ended and all that remained were Vieri and his guards, Mario and his mercenaries attacked them in a large open courtyard.[2]

Meanwhile, Ezio climbed the ramparts overlooking the courtyard, and dueled with Vieri, eventually killing him.[2]

After Ezio assassinated Vieri, he returned to Florence, where he met with Lorenzo de' Medici and acquired the identities of the remaining co-conspirators, two of whom had taken refuge in San Gimignano.

Upon entering the city, Ezio met with one of Mario's mercenaries, who informed him that the monk, Antonio Maffei, had fortified himself atop one of the tallest towers in the city, and had surrounded himself with archers.

Ezio made his way up the tower, assassinating guards and archers as he climbed higher. He eventually assassinated the monk on top of the tower, slaying the first of the two co-conspirators within the city.

The second of Ezio's targets in San Gimignano was the banker, Bernardo Baroncelli, who escaped from prison and remained hidden within the city. When Ezio located Bernardo, he was roaming the city with a group of guards around him, as he had grown paranoid of the Assassin after hearing of Antonio's death. Ezio still managed to assassinate Bernardo, however, and escape his guards.

After killing the co-conspirators and finding out the location of Jacopo de' Pazzi, Ezio traveled to Santa Maria Assunta, to tail Jacopo to another Templar meeting. Ezio followed him to the ruins of an ancient Roman theater just outside of San Gimignano.

There, Jacopo met up with two other Templars, Emilio Barbarigo and Rodrigo Borgia, and the three discussed the failed plot to overthrow the Medici. Rodrigo blamed Jacopo for the failure of the operation, and stabbed Jacopo, before leaving him to die.

Rodrigo then swiftly had his guards capture Ezio, who had been spying on their meeting. Rodrigo claimed that he had expected Ezio to follow, and ordered his guards to kill the Assassin, before leaving with Emilio. However, Ezio stabbed the two soldiers restraining him, and dispatched the remaining guards.

After that, Ezio proceeded toward the dying Jacopo, and put an end to his suffering with his Hidden Blade. Ezio then left San Gimignano to return to Florence, and inform Lorenzo of his success in the city.

A map of the city of San Gimignano

Ezio riding a horse with San Gimignano in the background

Ezio leaping from a tower in San Gimignano 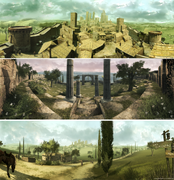