San Donato, also referred to as San Donato Milanese, is an Italian comune situated in the Milanese countryside.

In 2012, it was used as a simulated location by Abstergo Industries during the first and second stage of their Animi Training Program, being introduced to the latter with a system update.

The simulation depicted a small, quaint community set near a large fortification's walls that were built into the mountainside. At the comune's center was a large open courtyard, walled in by half-open hallways, to which heralds would make various announcements. The building featured a modest bell tower as well as some stables, where a few horses rested. Residences were for the most part quite plain, with some in obvious disrepair; even the church was under construction.

San Donato, like most of the simulated locations in the first and second stage, had two aesthetic variations. As such, it could be utilized during the day or the night.

The Doctor passing the Executioner in the streets of San Donato 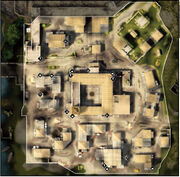 An aerial view of the San Donato map, with chase breakers marked
Add a photo to this gallery

Retrieved from "https://assassinscreed.fandom.com/wiki/San_Donato?oldid=731178"
Community content is available under CC-BY-SA unless otherwise noted.