Samuel Bellamy (1689 – 1717), also known as Black Sam and the Prince of Pirates, was an English pirate and a member of the Assassin Order who operated in the early 18th century. He was also an associate of fellow pirates Alonzo Batilla and Olivier Levasseur.

At some point in his life, Bellamy became a member of the Assassin Order. In order to infiltrate the pirate community, he began taking on the role of the "Prince of Pirates", speaking with a sophisticated voice and dressing in expensive clothing. Although he thought that the role was amateuristic and poorly performed, he acknowledged its effectiveness.[1]

Bellamy and his friend Paulsgrave Williams soon rose through the pirate hierarchy, double-crossing fellow pirate Henry Jennings, and taking his bounty and crew. Afterwards, Bellamy and Williams caught up with the pirate Benjamin Hornigold west of Cuba, intending to join his fleet by exploiting the hostility between Hornigold and Jennings to remain safe. Having made an impression on the Hornigold, Bellamy was given command of the newly captured Marianne, creating a highly successful crew.[1]

In July 1716, Bellamy and Hornigold's men had grown tired of Hornigold's reluctance to attack British ships. After the crew voted in favour of deposing Hornigold, the young pirate Alonzo Batilla appeared, offering to take the deposed captain away.[1]

Around January 1717, Bellamy received a letter from a fellow Assassin. According to the letter, the Fragment was being taken from Africa to the West Indies on board the ship slave ship Whydah, captained by the Dutch slaver Laurens Prins. Later that month, Bellamy met with Batilla near Havana. Apologizing for abandoning Batilla, he told him to find Prins' planned route. While Batilla was away, Bellamy was attacked by the Templar Francis Hume. However, Batilla intervened and rescued Bellamy.[1] 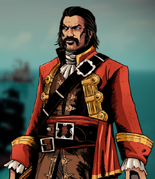 Bellamy close-up
Add a photo to this gallery

Retrieved from "https://assassinscreed.fandom.com/wiki/Samuel_Bellamy?oldid=584027"
Community content is available under CC-BY-SA unless otherwise noted.