"The waves crash on the rocks, day in, day out. The sound could drive you mad."
―An Abstergo Entertainment employee introducing Saba Island in Wolfpack's Discovery mode.[src]

Saba Island is a Caribbean island and the smallest special municipality of the Netherlands. It consists largely of the potentially active volcano Mount Scenery.

Reportedly found uninhabited by pirates in the early 17th century, Saba Island's stone city served as a hub and hideout for all manner of castaways. Built into the cavern's walls, the housing, consisting of stone ruins, was well-protected from Saba's frequent rainstorms, and strong enough to survive its rare hurricanes.[1]

In 2013, Saba Island was used as a simulated location created by Abstergo Industries' entertainment branch, in order to influence the general public through the console stage of their Animus technology.[1]

The simulation depicted a secret pirate lair dug into the cavern walls, with the upper levels of the stone city primarily used for storing supplies and stolen treasure. Dominating the area was the chief's house, a roughly-constructed tower-like residence of several storeys that proudly displayed the infamous black flag. An overgrowth of vegetation nearby, with serene waterfalls and pockets of sunlight, provided a nice contrast with the rough pirate community.[1]

With the implementation of new technology, simulated locations in the console stage were upgraded to have multiple aesthetic variations, as well as dynamic weather. Because of this, Saba Island could be utilized during the day and evening, during which a rainstorm could occur.[1] 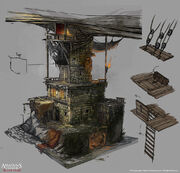 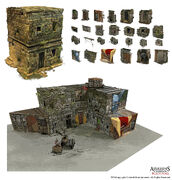 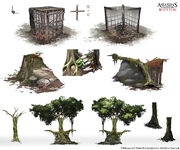 A ship moored in the harbor

The upper levels of the stone city

Hallways carved into the rocks 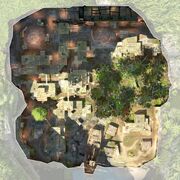 The Lady Black, the Adventurer, the Rebel and the Mercenary overlooking Saba Island

Blackbeard, the Orchid and the Jaguar at Saba Island

The Lady Black escaping the Duelist by using a lantern

The Rebel chasing the Adventurer through the island's jungle

The Adventurer being attacked by the Lady Black

The Lady Black being held at gunpoint by the Mercenary

Retrieved from "https://assassinscreed.fandom.com/wiki/Saba_Island?oldid=826116"
Community content is available under CC-BY-SA unless otherwise noted.