Sétnae (died c. 879), also known as The Cursed, was an Irish druidic priestess and a member of the cult, known as the Children of Danu. Sétnae held the title of High Druid.

Throughout most of her life, Sétnae was fascinated with death. Sétnae grew to learn about the poisonous plant life and how their consequential effects increased every time if they were combined with sacrificial blood. Her extensive knowledge caught the attention of the Children of Danu, and accepting the cult's invitation, Sétnae helped them rid their opponents as she continued to expand her knowledge on other fatal poisons. Due to her experience and expertise, Sétnae became one of the most valued and treasured member of the cult.[1]

The Viking jarlskona Eivor Varinsdottir came across the title, The Cursed, when she assassinated The Wren and recovered clues from her personal effects. After recovering The Wren's amber shard and giving to Deirdre Na Linni to make the antidote for Flann's poisoned army, Eivor discussed with Ciara ingen Medba about how she found out about The Cursed's role, which was to concoct the poison itself. Ciara divulged information about how The Cursed worked in a cottage in the village of Tuam.[2] As Ciara left with the cure, Eivor went to search for The Cursed's cottage in Tuam.[3]

Eivor traveled to the village of Tuam and searched for The Cursed's cottage. After finding the cottage, Eivor unlocked the entrance's lock and uncovered a note about how people noticed sounds coming from the underground cavern below the village. Thus, Eivor searched and found the entrance to the cavern, which held an underground druid lair for the Children of Danu. Eivor investigated the lair and found notes about an upcoming ritual led by The Cursed and rescued a prisoner who detailed The Cursed's plan to use her prisoners as sacrificial lambs for said ritual. After her investigation, Eivor met with Ciara and rode with her to Carnagan to stop the possible ritual. As they discussed how The Cursed had a púca alongside her, Eivor and Ciara saw The Cursed's púca and followed its trail. After a brief scuffle with the púca, Eivor and Ciara kept following the beast, which led Eivor and Ciara to the ritual at Lackanscaul.[3]

Upon their intrusion, Eivor and Ciara confronted The Cursed, whose identity became clear as she was known as Sétnae. Alongside her acolytes and her púca, The Cursed attacked Ciara and Eivor, but to no avail. The Cursed was fatally wounded as she was the last dark druid left standing. As Sétnae faced Eivor, she was punched down to the ground and came to rest on a stone slab. With her last words, Sétnae cursed Ciara for her "betrayal" and how Ciara had the "awful might" to take on the people against the druidic culture. Before she could finish, Sétnae succumbed to her wounds. Upon her death, Eivor received her amber shard from her personal effects, as well as two more clues involving the member known as "The Deer" and the Ollamh Druid called "The Oak".[3] 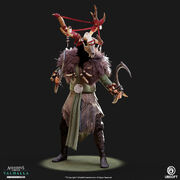 Concept art of The Cursed

Concept art of The Cursed performing a ritual at Lackanscaul

The demise of Sétnae, The Cursed